The Acting Director, De­fence Media Opera­tions, Brigadier General Benard Onyeuko, has disclosed that 1,081 terrorists with their families have surrendered to troops due to overwhelming kinetic and non-kinetic ac­tivities in two weeks. 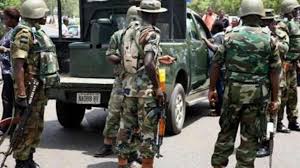 The Director, who stated this on Thursday, at the De­fence Headquarters, Abuja during a press briefing said, several other criminal ele­ments, including high pro­file ones, were either killed in action, or arrested, while many kidnapped civilians were rescued.

Gen. Onyeuko, who gave the breakdown of the op­erational activities of the Armed Forces of Nigeria between 9th and 23rd Decem­ber, 2021, revealed that some of their troops paid the “su­preme price in the course of the operations.”

He, however, acknowl­edged and saluted the “note­worthy efforts and sacrifices of their gallant officers and men” as well as other securi­ty agencies that progressive­ly conduct the various oper­ations across the country.

He said, “Besides, there are records of large num­bers of terrorists sur­rendering due to troops’ overwhelming kinetic and non-kinetic activities, while several kidnapped civilians were rescued.

“Additionally, troops’ ki­netic and non-kinetic opera­tions have continued to drive the terrorists out of their camps into surrendering. Within this period in focus, a total of 1,081 terrorists and their families comprising 187 adult males, 326 adult females and 568 children surrounded to own troops at different locations of the theatre. The surrendered terrorists were properly profiled and handed over to appropriate authorities for necessary actions”.

On ‘Operation Hadin Kai‘, Gen. Onyeuko disclosed that troops carried out several land and air operations that recorded significant results at different locations across the theatre within the period of two weeks.

Some of these locations, he said, are towns, villages and roads in Bama, Mafa, Pulka, Konduga, Gwoza, Mobbar and Dikwa LGAs of Borno State as well as Madagali LGA of Adama­wa State.

“Troops operational ef­forts in the locations in the last two weeks, cumulatively resulted in the neutraliza­tion of a total 51 and arrest of 19 terrorists. Also, a total of 122 assorted arms and 1,499 rounds of different cal­ibres of ammunition were recovered, while a total of 8 gun trucks of the terrorists were destroyed”.