A report by the office of the Auditor-General of the Federation, (AuGF), for 2019 has revealed that about 178,459 different types of arms and ammunition got missing from the Nigeria Police armoury without being reported in 2019. 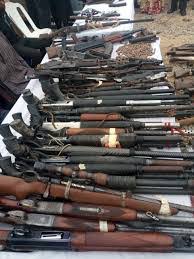 The disclosures are contained on pages-383 to 391 of the “Auditor-General for the Federation’s Annual Report on non-compliance/internal control weaknesses issues in Ministries, Departments and Agencies, (MDAs) of the Federal Government for the year ended 31st December, 2019”.

It also says the Police high command failed to keep a comprehensive record of unserviceable and expired firearms and ammunition. This, it says, could lead to the conversion of firearms for illegal use.

Referenced: AuGF/AR.2019/02 and addressed to the Clerk to the National Assembly, the September 15, 2021 report was signed by the Auditor-General of the Federation, Adolphus Aghughu.

The report says there was the risk of mishandling of firearms/firearms getting to the wrong hands, conversion of firearms to illegal use and loss of government funds.

The Auditor-General also queried the Police Force for engaging in financial irregularities of awarding and paying for contracts above its approval threshold and paying for them without evidence of project execution amounting to N3,271,439,688:30.

It said 10 contracts amounting to N1,136,715,200.00 were awarded to a single proprietor in the name of different companies with the companies’ profiles, contact phone numbers and email addresses of the three companies were the same.

It said further that “the three companies did not disclose their relationship in accordance with the fundamental principles of procurement as required by extant regulations”.

While attributing the anomalies to weaknesses in the internal control system at the Nigeria Police Force Armament, the AuGF said the contract might have been awarded to an “incompetent contractor”, while the payment was made for the contract not executed.

It asked the Inspector-General of Police to give reasons why contracts were awarded to companies owned by the same persons, account for the money and remit same to the true treasury.

The AuGF also demanded in the report that the Inspector General of Police should be asked to give reasons why payments were made for contracts not executed, recover and remit the said amount to the treasury.

It also indicted the Force for usurping the powers of the Federal Executive Council in awarding two contracts worth about N500.335 million which is above the approval threshold of the Nigeria Police Force Purchasing and Tenders Board.

The report further said the management of the Nigeria Police failed to provide ant response to the eight queries issued to them, while saying that the Inspector-General of Police be asked to provide answers to the Public Account Committees of both the Senate and the House of Representatives or be sanctioned for gross misconduct.