Gombe State Governor, Muhammadu Inuwa Yahaya( Dan Majen Gombe) has reiterated his administration’s commitment to ensuring a strong and independent Judiciary in order to facilitate fair and speedy dispensation of justice as well as the overall transformation of the judicial arm of Government. 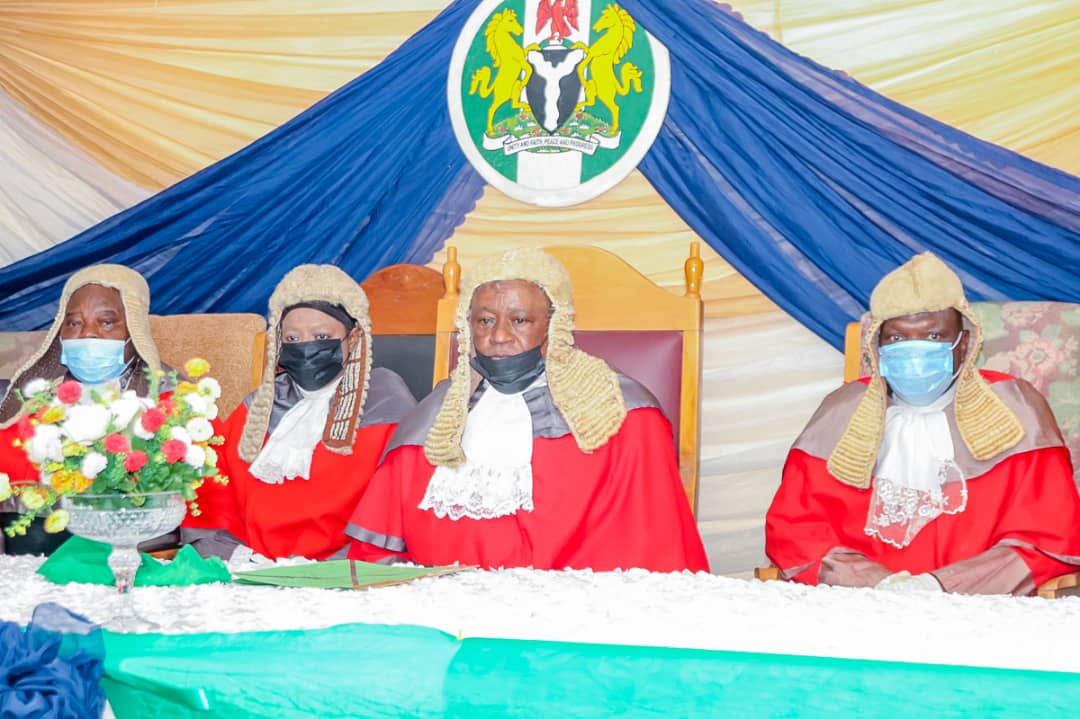 Governor Inuwa Yahaya stated this during a special court session to mark the commencement of the 2021/2022 legal year organized by the Gombe State Judiciary held at the State’s High Court Complex.

He assured that his government will continue to support and sponsor man power development and training as well as other aspects of welfare of Senior Judges and other Judiciary staff in the State so as to maintain the production of well-equipped and skilled officers while providing a conducive working environment for the Judiciary.

He observed that the commencement of the 2021/2022 legal year of the Judiciary is significant as it gives members of the bar and the bench the opportunity to have a sober reflection, self-assessment and critical examination of its achievements and challenges in the preceding year.

“Let me reiterate that our administration is committed to ensuring a strong and independent Judiciary in order to facilitate fair and speedy dispensation of justice as well as the overall transformation of this very important arm of Government”.

Governor Inuwa Yahaya used the occasion to commend members of the Judiciary for the laudable achievements and successes recorded by the courts in the discharge of their statutory responsibilities in the last legal year.

He noted with satisfaction the speedy dispensation of cases, especially in the lower courts where bulk of the cases are usually filed and presented for hearing.

“Equally for this new Legal Year, we wish the Judiciary a better performance in justice delivery, commitment and hard work in the disposition of cases before them. The respect for the rule of Law demonstrated by Mr. President and Commander- in- Chief of the Armed Forces of the Federal Republic of Nigeria has undoubtedly strengthened the crucial role of the Judiciary in the promotion and sustenance of democracy in Nigeria today”

“Suffice it to say, criminal justice delivery is a collective responsibility of all stakeholders in our judicial system. I find it imperative to commend the Judiciary for working in harmony with other sectors towards achieving our desired goal of entrenching a truly crime free and peaceful society. It is in this regard that I recently appointed 3 High Court Judges and 2 Khadis of the Sharia Court of Appeal to enhance speedy dispensation of justice. The State Government equally provided vehicles to the newly appointed Judges and Kadis to facilitate effective service delivery. Let me use this opportunity to assure the entire members of the Judiciary that we would continue to make available all necessary facilities that will enhance the effective discharge of their responsibilities”.

Governor Inuwa Yahaya said Government is aware of the challenges facing the Judiciary, particularly in the face of the current security challenges and high wave of crimes threatening peace and harmony in the North-East Sub-region and the nation in general.

He equally maintained that his administration is also mindful of the necessary financial requirements of the Judiciary. “I am constrained to point out however, that Governments at all levels are forced to drastically cut down expenditure as a result of the global economic crisis occasioned by the covid-19 pandemic. That notwithstanding, I want to assure My Lords that our administration is fully committed towards meeting the demands of the Judiciary. It is against this backdrop that Government considered the demands of the Judiciary Staff Union (JUSUN) which resulted in the mutual agreement that brought to an end the recent strike action embarked upon by the Union. I must commend the dexterity, maturity and high sense of leadership exhibited by the Union”.

He stressed that his administration will continue to support and sponsor man power development, training and other aspects of welfare of Hon. Judges and Judiciary staff in the State. This according to the Governor, is aimed at producing well-equipped and skilled Judicial Officers and Staff, while providing a conducive working environment for the Judiciary.

He said the State Government is committed towards strengthening of the Ministry of Justice to make it proactive and a worthy stakeholder in the administration of Criminal Justice in the State.

“In the spirit of the New Legal Year and in order to decongest our Prisons, I would like to appeal to our Judges and all stakeholders to ensure speedy determination of cases. As My Lords would say, “Justice delayed is Justice denied”.

He assured the Judiciary that Government would look into all the issues raised with a view to positively responding to them within avaliable resources.

Earlier speaking, the Acting Chief Judge of the State, Justice Mu’azu Abdulkadir Pindiga said in the year under review, the Gombe State Judiciary was able to hear and determine a total of ten thousand two hundred and seventy one cases out of the fourteen thousand seven hundred and fourteen litigations comprising both civil and criminal cases.

The Gombe State Acting Chief Judge who will soon is bow out of service after attaining the compulsory age of retirement, used the occasion to thank Governor Muhammadu Inuwa Yahaya for his friendly disposition to the Judiciary and respect to the rule of law, urging him to sustain steam.

The Gombe State Attorney General and Commissioner of Justice, Barr. Zubair Muhammad Umar told the gathering that from all intent and purposes, Governor Muhammadu Inuwa Yahaya has surpassed all expectations concerning his cordiality with the Judiciary and more importantly his respect to the rule of law.

He said since coming into office, the Governor has pragmatically addressed most challenges confronting the Judiciary through the construction and furnishing of office accommodation and digitization of offices of State counsels among other numerous interventions.

The Chairman, Nigeria Bar Association, NBA, Gombe State Chapter, Barrister Ahmed Tukur observed with satisfaction the coming into effect, the State Administration of Criminal Justice which he said was made possible through the instrumentality of Governor Muhammadu Inuwa Yahaya

He called on security agencies in the State to be civil in their dealings with members of the bar and the bench as well as citizens of the State.