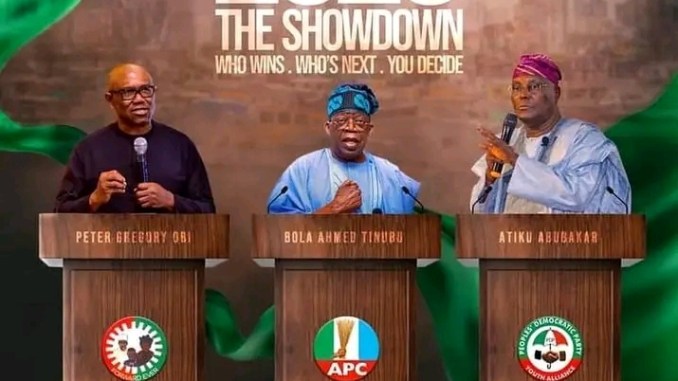 Tinubu, through his Presidential Campaign Council, said he is unperturbed by NOI polls, even as he described the poll as “dubious and fake statistics”.

Recall that a poll conducted by Ngozi Okonjo-Iweala Polls, and commissioned by the Atedo Peterside Foundation, showed that Peter Obi, of the Labour Party, would win if Nigeria’s presidential election was held.

The poll, which was conducted in September, points to a 3-horse presidential race between Obi, Bola Tinubu and Atiku Abubakar, of the Peoples Democratic Party, (PDP). They, however, described Rabiu Kwankwaso, of the New Nigeria People’s Party, (NNPP), who came fourth in the poll as a ‘dark horse’.

Reacting to the development, however, the APC Presidential Campaign Council, in an issued statement by its Director, Media and Publicity, Bayo Onanuga, yesterday in Abuja, described the NOI polls as dubious, unrealistic and inconsistent. He said the NOI Polls made wild and incredible permutations on the presidential elections.

According to the Council, the APC is putting in place structures that will make its margin of victory so wide that it will be difficult for the opposition to contest it at the tribunal. “Our candidate, Asiwaju Bola Ahmed Tinubu, recorded the highest votes of a senator across the country under the Social Democratic Party (SDP) in July 1992. He will do it on a nationwide scale on February 25, 2023”, the council boasted. “We are unperturbed by these dubious and unreliable statistics because our research shows that NOI Polls have been off the mark at critical election periods in recent times”, the council stated.

The Council recalled that towards the 2019 presidential elections, and knowing that President Buhari was going for re-election for a second term in office, “the NOI pollsters embarked on another abracadabra”.

It further said that the NOI has chosen the preferred candidate “and has decided to use fake, dubious statistics to package him to the Nigerian voters”.