The All Progressive Congress (APC) presidential aspirant, Rotimi Amaechi, on Thursday, said he is the only aspirant of the party with the solution to the myriad of challenges facing the country. 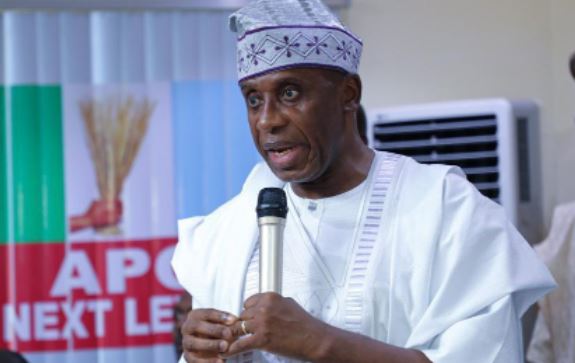 Amaechi, who spoke when he paid a consultative visit to the leadership of All Progressives Congress (APC) in Lagos State, the State governor, Babajide Sanwo-Olu, and the Oba of Lagos, Oba Rilwan Akiolu, said when elected president of Nigeria, he won’t ask for solutions to fix the country’s challenges but, will come with the solutions to solve the challenges.

The aspirant, who is currently the minister of Transportation, also stated that considering his wealth of experience, he would be a president that would protect the interest of all Nigerians irrespective of tribe or religion.

According to him, “We are at the point where our decisions will make the difference in moving the country forward. We are at the point where we can appeal to our conscience that our votes should count in making sure that we would not regret it after the election. So, put your votes for me. What separates me from the rest of the candidates in the party is that I am young and if you look at all of us, I come with experience”.

Amaechi also listed some of his achievements as a Minister and explained that it takes one with a national posture and outlook to cite the numerous projects recorded in Lagos outside the South-South where he hails from.

In his response, the State Chairman of the APC, Hon. Cornelius Ojelabi noted that there was a need to collectively protect the sanctity of the party. He also commended Amaechi for his courage and sagacity during the party’s formation stage.

At the governor’s office in Marina, Gov. Sanwo-Olu welcomed the Minister of Transportation, stating that in spite of his respect and high regard for the National Leader of the APC, Asiwaji Bola Tinubu, it is evident that Amaechi is also eminently qualified for the presidency.