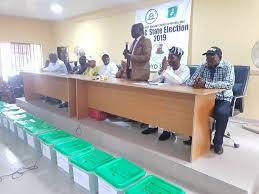 The National Chairman of IPAC, Yabagi Sani, while briefing newsmen on Monday, said though the provision may appear to be beneficial, Nigeria is currently not ripe to adopt such, and also urged the National Assembly not to attempt to veto the decision of the President as it will be a fruitless exercise.

The IPAC also called on the Legislature and the Judiciary to urgently come together to save democracy in Nigeria by putting a stop to the ugly trend of incessant defection of elected officers.

“We have noted that the only expressed grouse of the President on the basis of which he held back his assent, is the provision in the Bill for mandatory use of Direct Primary election in the selection of flag bearers of all the political parties.

“While many may not concede to the explanations of security challenges with the other reasons given by the President, it will be difficult, however, to disagree with him on the reason of complex logistics and huge financial burden that direct primary elections will imply for the Independent National Electoral Commission.

“Many have canvassed the view that no amount of money should be considered too high in the efforts to sanitise the nation’s electoral process and that the Legislature should, therefore, invoke its veto powers to overrule the President. To us in IPAC, such an action may be tantamount to a wholesale wrecking of the boat.

“We are of the view that, much as we may cherish its perceived benefits, the country, at this stage of the progress of its democracy, does not appear to be sufficiently ripe and prepared for the direct primary election model in the selection of political party flag bearers.

He said IPAC is inclined to the opinions that regard the National Assembly’s position on Indirect Primaries as amounting to an attempt to usurp the constitutional rights of parties as to the method of choice of party flag bearers.

Sani noted that the National Assembly members may have acted as interlopers, by trying to run political parties from the hallowed chambers because, in the context of international practises, party primaries elections cannot be legislated upon, and are best left to the discretion of the political parties.

The IPAC National Chairman also commended the National Assembly for the courage, high level of commitment and patriotism exhibited in the passage of a Bill, which he said has been widely applauded as groundbreaking and transformative in the annals of the nation’s legislative chambers.

“On the question of the incessant assault on the nation’s constitution by way of unconscionable defections of elected officials from one party to another, the IPAC National Executive Committee is calling on the Legislature and the Judiciary to urgently come together to save democracy in Nigeria by putting a stop to the ugly trend.

“This is based on our considered view that it is utterly illegal for an elected official who was elected on the platform and manifesto of one political party to abandon such a party while in office, without the constitutional conditions precedent to do so. In our view, the practice is at once, the height of a repulsive show of political adventurism, immoral, a rascally display of impunity, a shameless disregard for the constitution and an audacious rape of the mandate of the electorate.

“To the best of our knowledge, most incidents of defections, especially in recent times, have occurred without the obvious existence of such situations.

“IPAC wishes to point to the fact that frivolous and willful “cross carpeting” only exists in a parliamentary democracy and not in a presidential system of democracy that is extant in Nigeria, he added.