The Minister of Transportation, Rotimi Amaechi, has debunked claims that the All Progressives Congress (APC) has resolved to hand over power to its chieftain, Bola Ahmed Tinubu in 2023. 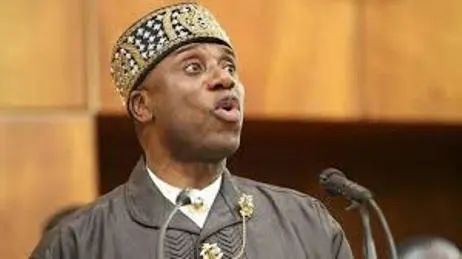 The minister made the disclosure while speaking in an interview with newsmen in Abuja.

This is coming amidst speculations that the ruling APC had an agreement to hand over its party presidential ticket to Tinubu when the political party was formed in 2014.

So far, Tinubu is yet to openly declare his presidential ambition official.

However, Amaechi, who served as Director-General of the Buhari/Osinbajo Campaign Organisation in 2015 and 2019 respectively, said he is not aware of any pact that President Buhari would hand over power to Tinubu.

Amaechi accused the political elites of burning the resources of Nigeria, saying deprived Nigerians would one day chase them out of Abuja.

The minister said some big men have relocated from their States to Abuja because they do not feel safe in their home States.

He also said secessionist agitations in the country should not be seen as a problem, saying economic deprivation and injustice are the reasons some groups are calling for a break-up.

The minister said both Nigerians in the northern and southern regions are deprived, adding that injustice did not start from President Muhammadu Buhari’s administration.

He added that however, someday, “the young boys we deprived” will rise up and chase the government out of Abuja, the seat of power.

According to the minister, infrastructural development is key to securing the future of the youths, hence the Buhari administration’s focus on building infrastructure.