The Economic and Financial Crimes Commission, (EFCC), has hinted to Justice Adeyemi Ajayi, of the High Court sitting in Abuja, that the suspended Accountant-General of the Federation (AGF), Ahmed Idris, and his co-defendants have reached out to the Commission for a plea bargain to avoid trial. 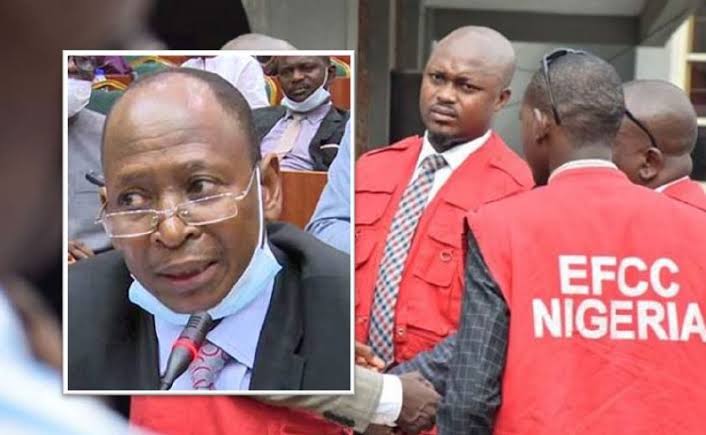 The former AGF is being prosecuted alongside 3 others on a 14-count bordering on alleged stealing and criminal breach of trust to the tune of N109.4 billion. The defendants were arraigned on July 22, on a 14-count charge bordering on money laundering, stealing and criminal breach of trust. EFCC accused Idris of diverting those funds through bogus consultancies and other illegal activities using proxies, family members and close associates, adding that they were laundered through real estate investments in Kano and Abuja.

At a resumed trial, counsel to the EFCC, Rotimi Jacobs (SAN), told the court that the suspended AGF had reached out to the agency through a third party for a meeting to work on ways to achieve a plea bargain arrangement. Section 270 of the Administration of Criminal Justice Act, 2015, provides for plea bargains.

A plea bargain is an arrangement between the prosecutor and the defendant whereby the defendant pleads guilty to a lesser charge in exchange for a more lenient sentence or an agreement to drop other charges.

Rotimi had informed the court that the former AGF with the other defendants had sent someone to EFCC’s office requesting a plea bargain arrangement. He said the meeting was slated for Monday, but a lawyer representing the AGF came to his office saying they were excluded from the arrangement.

Idris was arrested by the EFCC on May 16, 2022, over alleged diversion of funds and money laundering activities to the tune of N80 billion. The EFCC said he was arrested after he failed to honour invitations by the Commission to respond to issues connected to the alleged fraudulent acts. He was subsequently suspended from office by the Minister of Finance, Budget and National Planning, Mrs. Zainab Ahmed.

The other defendants in the suit include a Technical Assistant to Idris, Godfrey Olusegun Akindele; a director in the office of the AGF, Mohammed Kudu Usman, and a firm linked with Idris, Gezawa Commodity Market and Exchange Ltd.