The plea was contained in a statement signed by her party.

“The Tatamdaw’s (the military’s) action showed no consideration whatsoever for the ongoing COVID-19 pandemic and is just to bring the country back to the military dictatorship’’ Suu Kyi asserted.

“The public is urged to fully oppose the military coup and resoundingly resist against it,” she added.

Earlier, Myanmar’s military has declared a state of emergency for a year and installed a former general as president..

A former general named Myint Swe, who was previously serving as vice president, has been installed as acting president.

However, under the state of emergency military commander-in-chief Min Aung Hlaing has effectively taken control. 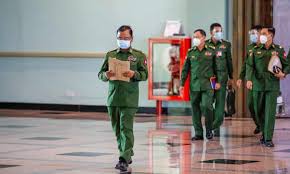