The Nigerian Air Force, (NAF) on Saturday foiled an attempt by bandits to kidnap 16 persons about 19.5 nautical miles South West of Gusau town, precisely between Magami and Tofa, Zamfara State. 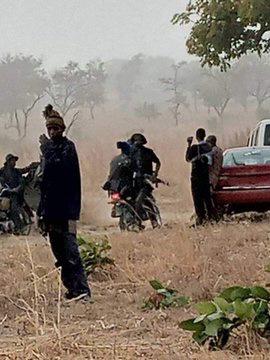 Sources said that the “successful deterrent” of the abduction of the 16 occured as the NAF Alpha jet on a routine reconnaissance mission under ‘Operation Hadarin Daji‘ sighted “suspected bandits on five motorcycles who had blocked Magami-Gusau road in an ongoing attempt at kidnapping commuters.”

The aircraft also saw four empty vehicles including two Golf Volkswagen sedans in grey and red colours off the roadside with all doors ajar.

The fighter jet noticed that at about two kilometres into the bush, the bandits were sighted with “about 16 persons being led further into the bushes”.

According to a source, “On sighting the Alpha jet, the bandits abandoned their motorcycles and fled into the bush in disarray while the commuters ran back to their vehicles in liberation and gratitude and drove off.

“The pilot exercised restraint in engaging with ammunition onboard the Alpha jet to avoid any unintended injury to the innocent citizens.

“However, the aircraft maintained maximum presence over the exact kidnap point to ensure the safety of innocent citizens within the area.”

However, NAF Spokesperson, Air Commodore Edward Gabkwet, is yet to reply to inquiries and confirmation of the incident involving the light attack NAF jet in Zamfara State.