Bandits have attacked Kagoro and its environs in Kaura local government area of Kaduna State, killing 11 people, while others sustained various degrees of injuries. 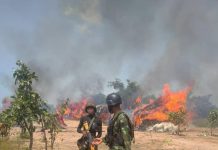 It was gathered that six persons were reportedly killed on Thursday, while five more bodies were found yesterday morning.

A survivor, who pleaded for anonymity, told newsmen that the gunmen attacked Kagoro on Thursday evening and unleashed mayhem on the inhabitants.

“Apart from those that have been confirmed killed by the attackers, l cannot give you the number of those injured because people took their injured relatives to hospital for treatment.

“It was a massive destruction meted on the people by the attackers”, the survivor said.

However, it was gathered that as of the time of this report, normalcy had returned to the trouble areas as people were seen moving around while vehicles were also moving to different locations.

Also, security men were moving around the area to ensure peace and avert any new attack.

The State Police Command and the state government are yet to issue any statement over the attack as of the time of this report.