Over 30 fighters of the Islamic State West Africa Province, (ISWAP), were reportedly killed after a combined team of soldiers and local hunters led by Yohanna Sarkin Yaki on Saturday ambushed them in Biu local government area of Borno State. 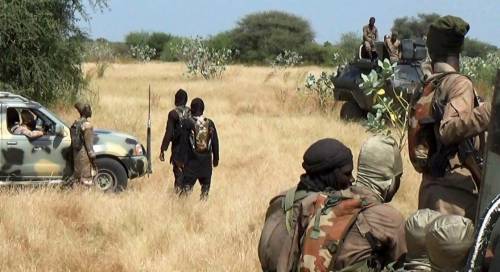 The ISWAP fighters, who were attempting to infiltrate Biu through ‘Manda Fuma’ one of the hot gates of the ancient city met their waterloo when local hunters and Nigerian soldiers laying in wait resisted their attempt to proceed.

The ISWAP fighters reportedly retreated after about three hours of fighting with no lead to proceed on their campaign.

Recall that after ISWAP fighters attacked the Army University School of War and Peace in Buratai town near Biu, they were sighted gathering along Sabon Gari and Wajiroko between Biu and Damboa town as well as in Ajigil and Kafa in Damboa.

Biu local government area of Borno is located in Southern Borno and exactly 187 kilometres drive from Maiduguri, the State capital.

The road to Biu from Maiduguri through Damboa has been shut down as a result of the activities of the terrorists around ‘Kukwayan Giya’, Talala, and Ajigil, around Alangaro forest linking to Sambisa forest in Borno State.

Local hunters in Biu said they have mounted a siege around the gates from Shani, Damboa, Shafts and Darin.