President Muhammadu Buhari has appointed Margret Okadigbo as Chairman of the Board of the Nigerian National Petroleum Company, (NNPC), Limited. 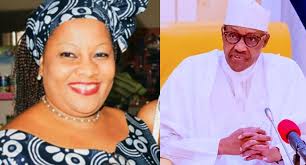 Mrs. Okadigbo is replacing Senator Ifeanyi Ararume, who has been having a running battle with Governor Hope Uzodimma of Imo State.

The replacement is contained in a statement titled: ‘President Buhari appoints board and management of NNPC Limited’, issued by the Special Adviser to the President on Media and Publicity, Femi Adesina yesterday, in Abuja.

The new appointee is the wife of a former President of the Senate and running mate to President Buhari in 2007 under the All Nigerian Peoples Party, (ANPP).

The appointment is in accordance with the power vested in him under Section 59(2) of the Petroleum Industry Act, which he signed on August 16, 2021.