…”We did nothing wrong” – NASS

President Buhari, yesterday, said he signed the Bill into law despite his reservations about many of the changes that the NASS members made to the Executive proposal. 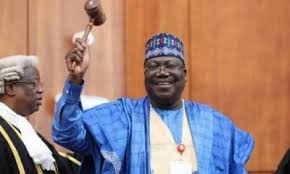 The president made the revelation on Friday during the signing of the 2022 Appropriation Bill, as well as the enabling 2021 Finance Bill, into law.

Flanked by the President of the Senate, Ahmad Lawan, the Speaker of House of Representatives, Femi Gbajabiamila as well and the Minister of Finance, Zainab Ahmed, as well as other top government officials, President Buhari said he signed the Bill into law in order to enable its implementation to commence on 1st January, as has been the tradition for some years now.

The President noted that the lawmakers mutilated and padded the original 2022 Executive Budget proposal with insertions of new projects, outright removals of others, as well as reductions and/or increases in the amounts allocated to projects.

Buhari further noted that the lawmakers increased the revenue expected for funding of the budget by N400bn without indicating where the additional money will come from. Also, the lawmakers reduced the amount allocated to the sinking fund for retiring Bonds that will mature by N22 billion without any explanation. According to him, the National Assembly reduced allocations for as many as 10,733 projects in the 2022 Budget, while 6,576 new projects were introduced by the National Assembly.

The President also noted that the lawmakers reduced provisions for many strategic capital projects in favour of their own ‘empowerment’ projects to the detriment of the nation. According to the President, he approved the increase of the Budget proposal by N186.53 billion to cover expected expenditure on additional critical expenditures and he consequently authorised the Minister of Finance, Budget and National Planning to forward the request for the increase to the National Assembly.

Consequently,the President Buhari said while he signed the 2022 Appropriation Bill into law to enable its implementation to commence on 1st January 2022, he will revert to the National Assembly with a request for amendment and/or virement as soon as lawmakers resume from their Yuletide break. This, he said, he will do in order to ensure that critical on-going projects that are cardinal to his administration, and those nearing completion do not suffer a setback due to reduced funding.

However, in a swift response, the Senate President, Ahmad Lawan, said they did nothing wrong over the changes they made to the 2022 Budget presented by the President. Fielding questions from correspondents on Buhari’s reservations about the budget, Lawan maintained that the lawmakers were right in their judgement.

According to him, the president and the legislature’s views may not necessarily be the same on issues.