Rivers State governor, Nyesom Wike, has said the fight to stop crude oil theft has continued to fail, because top-ranking officers of the military, police and the Nigeria Civil Defence Corps, (NCDC), were involved in the illegal activities. 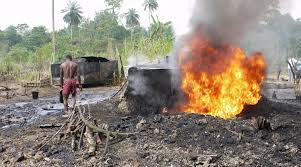 Wike stated this yesterday, when he hosted the Chief of Air Staff, Air Marshall Isiaka Oladayo Amao, on a courtesy visit at Government House, Port Harcourt.

He urged the Federal Government to consider the damage caused by the activities of crude oil thieves to the economic mainstay of the country and treat them as treasonable offenders.

The governor noted that it was not only the wastage of the economy that was witnessed, but the degradation that the environment also suffered, which also impacted negatively on rural communities in the State.

“I don’t know whether we should take the issue of bunkering to even be more serious than treason. If you go around and see what has happened to our environment, you’ll have pity on us,” he said.

The Rivers governor, however, wanted members of the military task force deployed to arrest the illegal oil bunkers to find a better and environmentally friendly way to destroy bunkering sites in the state.

In his speech, Amao said he was on an operational visit to 115 Special Operation Group in Rivers State and decided to pay a courtesy visit to the governor, whom he claimed had contributed immensely to the functioning of their base in Port Harcourt.

“We commend you for being able to contain the security situation in the State. Rivers State has been a very peaceful State; that is why, most times, I and the Service Chiefs have to focus on other places with many problems.

“The governor is able to achieve this state of peace, because, and from the brief I got from my officer, he has been a very good coordinator and also assisted the security agencies in the discharge of their duties”, he stated.