The Chinese government has said it is perfecting plans to work with the Nigerian government to produce 400 million doses of its Covid-19 vaccines in the country. 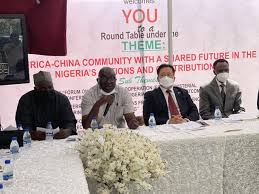 The Chinese Ambassador to Nigeria, Cui Jianchun, disclosed this on Tuesday, in Abuja, at a round table organized by the Center for China Studies (CCS), themed: ‘Build an African-China Community with a Shared Future in the New Era: Nigeria’s Actions and Contributions’.

According to the Chinese envoy, plans are underway to lead Nigeria in producing the Chinese Covid-19 vaccines in the country soon.

The Chinese government has donated millions of doses of its Sinopharm and Sinovac to many countries, particularly in Africa, Asia and Latin America. But, the Federal Government has not approved the vaccines for use in the country.

Nigeria has not taken up its offer of 7.7 million doses of the Chinese vaccine through the COVAX scheme aimed at providing vaccines to developing countries.

Recall that the Chinese government had also in July 2021 offered 470,000 doses of its Covid-19 vaccine to Nigeria, but the offer was not taken up.

The Round table aimed at reflecting on the opportunities of the recent outcomes of the Forum on China-Africa Cooperation which was held in Dakar, Senegal.

Cui said that the development of vaccine production is in line with China’s commitments of leading Nigeria and other Africa countries to be self-reliant and to close the immunisation gap.

He further said that the move was in line with Chinese President Xi Jinping’s recent remarks during the Eighth Ministerial Meeting of the Forum on China-Africa Cooperation, (FOCAC).

He said that President Xi Jinping during the FOCAC Ministerial meeting said that the Chinese Government would work with Chinese companies and Africans would be involved to work together to produce 400 million vaccines in Nigeria.

At the opening ceremony of the FOCAC Conference, President Xi Jinping announced another one billion doses of Covid-19 vaccines to Africa.