The National Hajj Commission of Nigeria (NAHCON) has urged intending Umrah pilgrims and licenced Tour Operators to abide by the regulations laid down by the Saudi Authority for successful participation in Umrah for external pilgrims.

The Head, Public Affairs of NAHCON, Fatima Usara, made the call in a statement in Abuja.

“NAHCON enjoins licensed Umrah operators and the pilgrims to be abreast with the Saudi Arabian’s regulations and guidelines for the performance of the pilgrimage, especially with regards to precautionary measures detailed to prevent the spread of COVID-19.

“As in previous arrangements under the COVID-19 pandemic, pilgrims are to travel in groups to be conveyed by authorised tour operators.

“In particular, Umrah pilgrims that should be from age 18 and above must ensure that they complete the doses of the COVID-19 vaccine and attachy the certificate of immunisation in their request for umrah permit.

“The vaccine type should be in consonance with the Kingdom of Saudi Arabia approved protocol,” she said

Usara advised umrah pilgrims to get acquainted with the Eatmarna app as a prerequisite for applying and gaining entrance into the two Holy Mosques for Umrah, for salat and for visit to the Prophet Muhammad Raudha.

According to her, all umrah activities (and ziyara into the raudha in Madinah-if it is part of the package applied for) will be coordinated based on reservations obtained on behalf of the pilgrims by accredited tour operators.

“Intending pilgrims are also advised to visit a standard health facility in the country to verify their health status before requesting for the umrah visa.

” Tour operators are to note that they have a responsibility to their clients and the Kingdom of Saudi Arabia to safeguard their interests and honour their terms of engagement.

“And, visitors to the Prophet’s mosque coming from outside the Kingdom of Saudi Arabia for the 1443 AH season which is available on the ministry’s portal (https//www.haj.gov.sa).”

She quoted Secretary for Umrah Affairs, Dr Abdul Aziz bin Abdul Rahim Wazzan as saying this in the guidelines for Umrah pilgrims.

According to her, these terms of engagement are as contained in the document signed by the Secretary for Umrah Affairs.

“NAHCON enjoined Nigerian umrah pilgrims and licenced tour operator to be good ambassadors of the country and kindly avoid indulging in any act that was capable of causing any form of embarrassment to the nation.

“In case of breach of contract agreement, NAHCON’s doors are open to receive complaints from any aggrieved party,” she said. 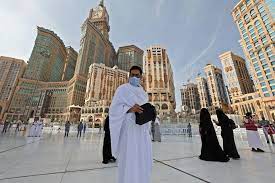