Nigeria’s oil thieves and illegal refiners have constructed a network of pipelines which transits through the bushes into reservoirs, which in some cases spill and waste. 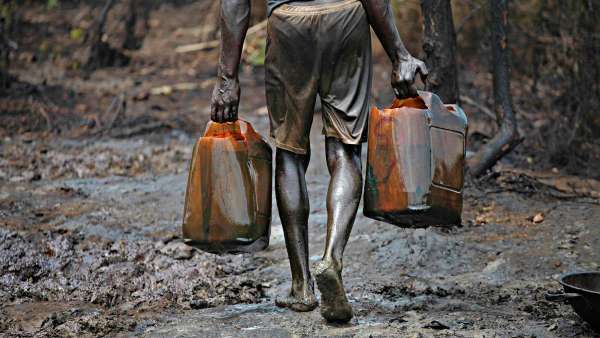 He said this while giving a situation report of its operation to curb oil theft and illegal refining activities in the region.

The report was given during an assessment tour organised by the Nigerian National Petroleum Company Ltd. (NNPC) on some illegal crude oil refining sites in Rivers.

According to the JTF Commander, “The reservoirs have been destroyed; if you do not destroy the tanks completely, they will reconstruct and continue”.

Hassan said that the fight against oil theft will continue until the criminals surrendered.

Hassan said the fight against oil theft was a difficult one because of the terrain, but assured that his men were out to end illegal refining and oil theft in the country.

He described the work of the JTF as a multi-agency operation covering 10 States, with the collaboration of 12 security agencies.

Hassan said there were a lot of illegal refining camps in the country but that clearance operation had started to ensure they were not resuscitated after being destroyed.

“The way we are working is the same way the criminals involved in the illegal refining are working; but we are ahead of them”, he stated.