Officers and Men attached to the Zone ‘B’ Strike Force Team of the Nigeria Customs Service (NCS), have arrested three smugglers and intercepted contraband with a duty paid value of N786,911,648 across the northern region.

The unit coordinator, DC Oseni Olarukoba, disclosed this on Friday, during a press briefing held at the Katsina State Command headquarters of the NCS.

The contraband he explained, was intercepted within the long stretched borders of the Northern States, which covers the Far North-East, North-West and North-Central parts of the country.

Olorukoba, while taking journalists round to some of the seized items in display noted that 16 assorted items were seized within the period under review across Kano, Katsina, Kaduna, Kebbi, Sokoto and the north-eastern States of Borno, Yobe, Bauchi, Adamawa and Taraba. 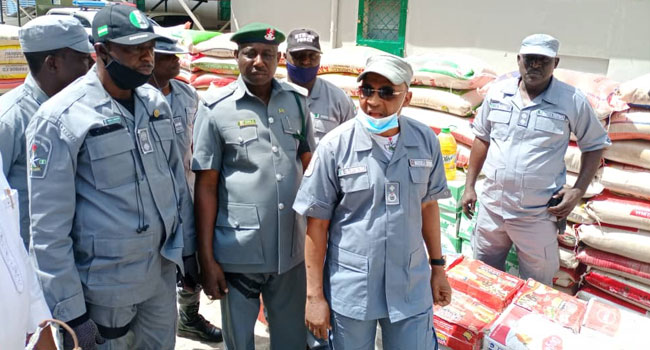 Pix caption: The unit coordinator, DC Oseni Olarukoba with other officers during the display of the seized items.

He further stressed more community collaboration from the border communities especially information sharing and supply about the activities and movements of smugglers to get it right.