As the 2023 general elections draw nearer, this is certainly not the best of times for Ebonyi State governor, David Umahi and his Deputy, Dr. Eric Igwe. 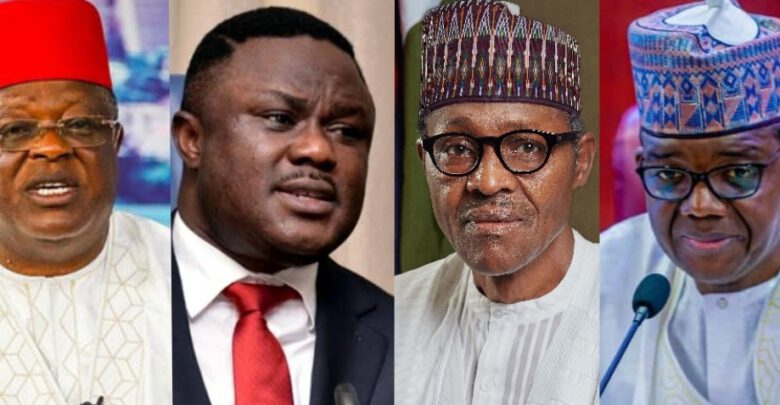 The duo were last Tuesday, sacked from their respective offices by a Federal High Court in Abuja, following their defection from the Peoples Democratic Party, (PDP), to the ruling All Progressive Congress, (APC).

Their sack came about a year to the expiration of their second tenure in office.

Justice Inyang Ekwo, who delivered the judgment, maintained that Umahi and Igwe, having defected to the APC, they not only jettisoned the PDP, but also the votes that guaranteed their re-election.

He held that the total number of 393, 343 votes the Defendants (Umahi and Igwe) secured during the March 9, 2019 governorship election in Ebonyi State, belonged to the PDP and as such, same could not be legally transferred to the APC.

The court equally ordered 16 members of the Ebonyi State House of Assembly that joined the governor and his deputy to move over to the APC on November 17, 2020, to vacate their seats. The judgments followed two suits which the PDP lodged before the court.

Meanwhile, Umahi, Igwe, and the affected lawmakers, among whom included the Speaker and Deputy Speaker of the Ebonyi State House of Assembly, have all gone before the Court of Appeal in Abuja to set aside the judgment, which they said occasioned a grave miscarriage of justice against them.

Umahi had, in a fit of rage after he was notified about his sack, accused Justice Ekwo of doing a hatchet job.

The Nigerian Bar Association, (NBA), quickly rose in defence of the judge and demanded an apology from the embattled Ebonyi governor, a request he promptly complied with. Although Umahi and his deputy have applied for the stay of execution of the judgment that removed them from office, another court in Ebonyi state, last Thursday, issued an interim order that mandated them to continue to remain in office.

Meanwhile, Umahi and his deputy are not the only ones attempting to navigate through the troubled waters of defection, as the judicial axe is equally precariously dangling on heads of governor Bello Matawalle, of Zamfara State, and his counterpart in Cross-River State, Ben Ayade. Both Matawalle and Ayade had decamped from the PDP to the APC.

Like in Umahi’s case, the PDP, is currently in court, demanding their sack. While the PDP wants Ayade and his deputy, Ivara Esu to vacate their respective offices, it dragged only Matawalle before the High Court.

Although, governor Matawalle decamped to the APC, his erstwhile deputy, Mahdi Aliyu-Gusau, refused to leave the PDP.

Aliyu-Gusau was subsequently impeached by the Zamfara State House of Assembly on February 24, after which Sen. Hassan Nasih was sworn-in as his replacement.