The Director-General, Voice of Nigeria, (VON), Chief Osita Okechukwu, has appealed to President Muhammadu Buhari to endorse the electronic transmission of results contained in the recent Electoral Act (Amendment) Bill passed by the National Assembly. 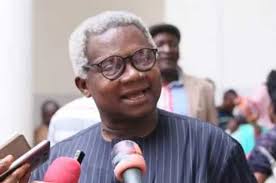 Speaking on the raging controversy over Direct Primary mode of electing party candidates inserted into the yet-to-be-endorsed Electoral Act (Amendment) Bill, Okechukwu, who is a foundation member of the All Progressives Congress (APC), appealed to President Buhari not to ‘throw away the baby and the bath water’.

In an issued statement in Abuja on Sunday, the VON DG said, it is my candid appeal that, “Mr. President should endorse the Electronic Transmission, contained therein; which is the mother of Bimodal Voters Accreditation System, (BIVAS)”.

Okechukwu re-echoed that “BIVAS is vaccine to vote-rigging; the most patriotic item in the Bill, an offspring of electronic transmission, which ultimately fulfills the legacy pledge of Mr. President to bequeath credible, free and fair elections to Nigerians”.

Okechukwu said: “This amendment, if signed by the President, will also stop the governors from removing federal lawmakers at will. They (governors) just sit in their offices and decide who will return and who will not return. They have been doing this for 20 years.”

In the same context, the Director_General, PGF, Comrade Salihu Lukman, added, “The vulnerability of direct primary to manipulative intrigues of political leaders was further confirmed in the just concluded Anambra Governorship election. The APC candidate in the election, Senator Andy Ubah, during the APC primary election was said to have emerged with 230,201 votes. But he only got 43,285 votes during the election”.

According to him, “Some measure of honesty is required from all leaders to address problems of internal democracy with political parties in Nigeria. No doubt, Nigerian democracy needs to be deepened to broaden the participation of party members in the process of selecting party candidates.

“But, given the way some APC leaders are desperately and aggressively campaigning for adoption of the amended Electoral Act as passed by the two chambers of the National Assembly, with all its ambiguities, makes it suspect”.