The National Association of Nigerian Students (NANS), Ogun State chapter, has called on Yoruba leaders to stop pushing for a divided Nigeria.

The Ogun NANS Chairman, Damilola Simeon, said this at a press conference held at the NUJ Secretariat, Okelewo, Abeokuta, today. 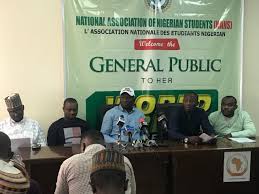 The students’ organisation also warned all South-West activists to be cautious of their utterances in response to the security challenges facing the nation. It condemned in its entirety, the unabated attacks on the indigenes of the State, especially farmers, by killer herdsmen in Yewa, saying such attacks were necessitated by the country’s porous borders.

Reacting to a claim by the Miyetti-Allah Cattle Breeders Association that the killer herdsmen were not Nigerians, NANS called on the Federal Government to, as a matter of urgency, create a Federal Joint Border Patrol Team to basically reinforce the security architecture of all border communities in Nigeria.

The students’ leader called on its royal fathers to support the efforts of the Ogun State Government in securing the lives and property of their people, urging them not to allow any politician to take advantage of the situation in creating rooms for destructive criticism, adding that “We also advice all activists from South-West extraction to be cautious in their utterances in response to these attacks”.

The leadership of the NANS also implored “Nigerians seeking refuge outside the nation to please jettison the idea and call on those that have fled based on the security situation to return home and join hands with the provided security from government and take possession of their property”.

The NANS also implored a few of their youths in Ogun State, “floating different emergency youth bodies/organizations that were unknown before the occurrence of this farmers/ herders crisis in the axis to please disengage themselves from not being progressive in their agitations and should desist from being a tool in the hands of some desperate politicians”.

It commended Governor Dapo Abiodun for his swift response and untiring efforts in bringing normalcy to the security situation.