…President yet to communicate – Senate Spokesman
…”We will override him”, Lawmakers insist

As the number of days stipulated by law for President Muhammadu Buhari to assent or decline assent to the Electoral Act Amendment Bill 2021 expired yesterday, there is reportedly an uneasy calm between the National Assembly and the Presidency. 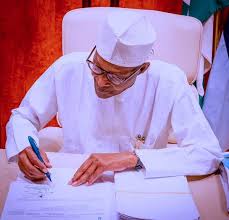 It was gathered that lawmakers are already mobilising themselves, awaiting any official communication today, Monday, to enable them to take a decision tomorrow.

Recall that the National Assembly bureaucracy submitted the clean copy of the bill to the President on Friday, November, 19, 2021.

The Special Assistant to the president on National Assembly Matters, (Senate), Babajide Omoworare, confirmed that the President received the Bill.

As of yesterday, December 19, exactly one month since the Bill was submitted to President Buhari, there is no official communication on it. The lawmakers were supposed to proceed for a recess last week but deferred it till this week.

The Minority Leader of the House of Representatives, Ndudi Elumelu, has assured Nigerians that they will override President Muhammadu Buhari if he does not sign the Bill.

Elumelu, who stated this during an interaction with newsmen at the National Assembly, said the new Electoral Bill is a product of Nigerians and largely contains things that will improve the electoral system.

The Senate spokesman, Basiru Ajibola, said they are yet to receive any communication from President Buhari on the matter.

But Civil Society Organisations (CSOs) have urged the members of the National Assembly to override the president if he refuses to assent to the Electoral Bill, insisting that they have the powers.

The national president, Vanguard for Transparent Leadership and Democracy (VATLAD), Comrade (Engr) Igbini Odafe Emmanuel, said both INEC and the National Assembly should not mislead Nigerians on the electoral act.

Also, the Executive Director, Centre for Democracy Development, (CDD), Idayat Hassan, said the lawmakers should ensure they override the president.

On his part, the Executive Director, Civil Society Legislative Advocacy Centre, (CISLAC), Auwwal Musa Rafsanjani, called on the lawmakers to adhere to the yearning of Nigerians by overriding the president if he declines.

Also, the Executive Director, Yiaga Africa, Samson Itodo, said for a successful conduct of any election, the legal framework, amongst other factors, must be considered, and urged the National Assembly to override the president.

Also speaking, the Executive Director, Centre for Citizens with Disability, (CCD), David Anyele, called on the National Assembly to override the president if he does not sign the Bill.