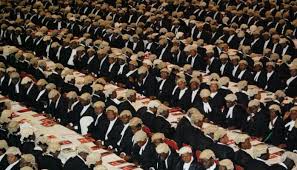 The NBA had issued this statement a few days before President Buhari in a letter to the National Assembly on Tuesday, declined his assent to the Bill. Earlier, rising from its National Executive Committee (NEC) held in Abeokuta, Ogun State, on December 16, the NBA had advised President Buhari to sign the Bill into law.

The body, which just released its NEC resolution communiqué on Wednesday, by the NBA’s National President, Olumide Akpata, read: “NEC called on the President of the Federal Republic of Nigeria, President Muhammadu Buhari, to speedily sign the Electoral Act (Amendment) Bill into law before the timeline expires and where he fails to do so, charged the National Assembly to exercise its powers under the Constitution by overriding the presidential veto”.

In its response to the widespread security crises in Nigeria, the umbrella body of lawyers called on the “Federal Government and security agencies to carry out their primary constitutional duty to ensure the safety of life and property.” The NBA expressed “deep sadness over the deteriorating of national security”, referencing “the precarious security situation in Zamfara State”, which it said had become a “real threat to legal practice in the State”.

As part of its resolution, the NEC took a swipe at the Attorney-General of the Federation, (AGF), Abubakar Malami, over his denial of an amendment to the rules of professional conduct of the NBA. The amendment, which took place at the National Assembly, purports to cede control of the NBA to the Body of Benchers in the event of a crisis in the association.

The NEC also expressed worry that the AGF has repeatedly denied knowledge of the Task Force allegedly working under him and who are alleged to have laid siege to the residence of Mary Peter, a Justice of the Supreme Court, last October. It also passed a vote of confidence in the NBA President, Apata, for his “excellent, proactive and purposeful leadership of the association”.

The association, however, resolved to suspend physical meetings for the time being, and to resort to virtual meetings due to the surge in the Omicron variant of the Covid-19 virus and the security concerns in the country.