The 14th Emir of Kano and former governor of the Central Bank of Nigeria (CBN), Muhammadu Sunusi II, has said the Arabic inscriptions, known as ‘Ajami’, will not be removed from the redesigned naira notes. 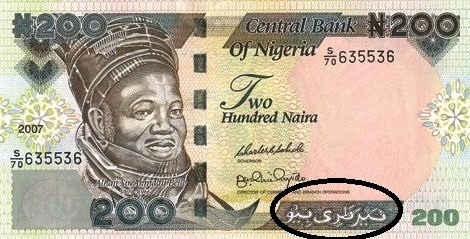 Sanusi also said the N5, 000 currency note proposed during his time at the apex bank is still under consideration.

Sanusi who spoke on Monday, said the current CBN governor Godwin Emefiele, had confirmed to him that the inscriptions, which is an Arabic derivative of Hausa, will remain on the redesigned currency

Recall that the CBN, last week, announced that it has redesigned N200, N500 and N1000, Naira notes, adding that the new design and issues will be effective from mid-December 2022. The development had sparked rumours on social media that the currency redesign was a ploy by the Federal Government to remove the Ajami inscription from the notes.

However, refuting the rumours, Sanusi urged religious leaders to desist from spreading unverified and misleading information to the public.

Sanusi particularly appealed to Islamic preachers to always verify and seek clarification on issues that are not clear to them, instead of acting on unsubstantiated claims. He also claimed that plans to introduce N5, 000 notes have not been forgotten.

Recall that plans to introduce the N5, 000 note in 2012 was resisted, forcing the CBN to shelve the idea.

“We believe that the introduction of a higher bill would complement the bank’s cashless policy, as it would substantially reduce the volume of currency in circulation, particularly in the long-term”, Sanusi stated.