The Emir of Kano, Aminu Ado Bayero, is reportedly set to marry his heartthrob simply identified as Hajiyayye, in Dorayi area of Kano metropolis. 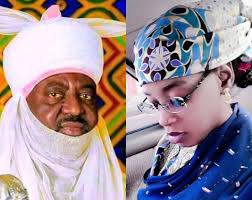 The 60-year-old monarch has been married to only one wife for over three decades and they have four children together.

According to reports, plans have been on top gear between the representatives of the royal family and the family of the fiancee.

The report says there won’t be pomp and pageantry, as “the emir is reclusive’ and the family of his fiancee are ‘ordinary people’.

It added that the wedding will take place in a matter of days or weeks. It was adjourned several times in the past, and since it will be a low-key event, it can take place at any moment.

Born in 1961, the monarch is the 15th Fulani Emir of Kano from the Fulani Sullubawa clan. He ascended the throne on 9 March 2020, following the deposition of his nephew Muhammad Sanusi II by Governor Abdullahi Umar Ganduje.