Kano State governor, Abdullahi Umar Ganduje, has rejected the court judgment declaring the banishment of the deposed Emir of Kano, Sanusi Lamido Sanusi, and the award of N10 million to him as compensation. 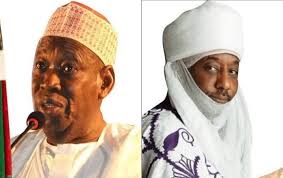 Recall that Justice Anwuli Chikere, of the Federal High Court, Abuja, had yesterday awarded the N10 million compensation against the state and other respondents comprising the police, the State Security Service, (SSS), and the Attorney-General of Kano State, and also ordered the State government to tender a public apology to Sanusi in two national dailies.

The Court also held that the Emirate Council Law, 2019, which was relied upon by government in banishing the Emir was in conflict with the Nigerian Constitution, and therefore, is null and void.

Justice Chikere had also stated that with the Nigerian constitution being supreme and above the Emirate Council Law, the Kano State government had no basis to banish the former Emir as he had the ‘right to live anywhere, including Kano State, as enshrined in the country’s constitution’.

However, Ganduje, in reaction to the ruling today, through his Commissioner for Justice and Attorney-General, Musa Lawal, insisted that the Nigerian Constitution recognises both tradition and custom and that they should be protected.

Lawal added that going by the customs and tradition as enshrined in the state’s laws, the deposed Emir stands banished and that the government would do everything possible to protect the custom and tradition of Kano people.

“We reject the ruling of the Federal High Court and as far as the government of Kano State is concerned, Malam Muhammadu Sanusi II remains banished,” he added.