European Union (EU) leadership reacted in condemnation to the events unfolding in Myanmar on Monday, urging the release of those detained and compliance with the disputed election results.

“I strongly condemn the coup in #Myanmar and call on the military to release all who have been unlawfully detained in raids across the country,” President of the European Council, Charles Michel, said in a tweet.

He added that the democratic process must be restored.

The EU’s foreign policy chief, Josep Borrell, echoed Michel in issuing a strong condemnation and called to respect the election and the constitution.

“The EU stands with them,” Borrell tweeted.

Earlier in the day, media outlets reported that both State Counselor Aung San Suu Kyi and President Win Myint were detained in an early morning raid.

Suu Kyi’s National League for Democracy emerged victorious in Myanmar’s Nov. 8 election, the second since the end of military rule in the country in 2011.

Myanmar’s military has accused the government of conducting the election fraudulently and vowed last week to “take action.” 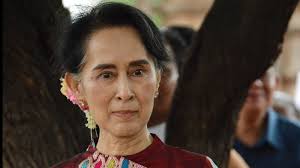