The Federal Government has said it is putting the International Criminal Police Organisation (INTERPOL) on the alert following the jailbreak that rocked the Kabba Medium Security Custodial Centre, (MSCC) in Kogi State, yesterday. 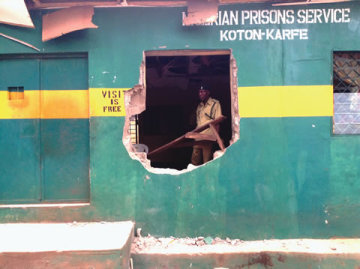 Contrary to initial reports, the Federal Government also said at least 266 inmates of the facility were freed by gunmen who also killed one soldier and one policeman during the attack, adding that two officers of the Nigeria Correctional Service (NCoS) are yet to be accounted for.

The Correctional Service spokesman, Francis Enobore, also confirmed that the attack took place at about midnight on Sunday, when the gunmen, in their numbers, arrived at the custodial centre heavily armed and immediately engaged the security guards on duty in a fierce gun battle.

It was gathered that during the attack, security officers, which comprised 15 soldiers, 10 Police officers and 10 armed guards of the NCoS on duty fought gallantly to repel the attack.

Regrettably, two officers of the Correctional Service are yet to be accounted for while one soldier and a policeman lost their lives during the attack, media adviser to the minister, Sola Fasure, in a statement said.

Some eyewitnesses’ accounts earlier claimed that four soldiers were killed and 240 inmates were freed during the attack. However, Fasure said the Kabba Custodial facility had 294 inmates at the time of the attack, many of whom escaped after the gunmen used explosives to destroy three sides of the perimeter fence.

He noted, however, that there remained 28 inmates who did not escape, adding that some have also voluntarily returned to the facility as of yesterday morning.

He added that the Minister of Interior, Ra’uf Aregbesola, has been briefed by the Controller-General of the NCoS, Halliru Nababa, on the unfortunate attack.

The minister, while reacting to the development assured the citizenry that Nigeria’s security forces would find the attackers and bring them to justice.

He said, “We are also putting INTERPOL on notice with their details, in case any of them attempts fleeing outside our shores”.

Aregbesola insisted that the Nigeria Correctional Service shall not be cowed by elements seeking to compromise the security of our nation; we shall deal with this situation with absolute resolve.

“Further updates will be provided after the end of the preliminary assessment”, he stated.