…Says all terrorists in Nigeria will be eliminated by December

The Federal Government has disbanded the National Task Force on the Prohibition of Illegal Importation/Smuggling of Arms, Ammunition, Light Weapons, Chemical Weapons and Pipeline Vandalism (NATFORCE). 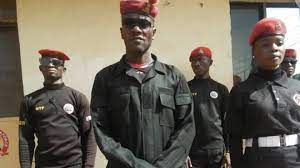 The Minister of Interior, Ra’uf Aregbesola, made the announcement while briefing State House correspondents after the National Security Council meeting in Abuja, yesterday.

Briefing State House correspondents at the end of the meeting, the Minister of Interior, Rauf Aregbesola, said the President was particularly pleased with the Nigeria Police Force for maintaining high professionalism during the conduct of gubernatorial elections in Ekiti, Osun and Anambra States.

Aregbesola also revealed that the Security Council meeting deliberated on the activities of the National Taskforce (NATFORCE) on the prohibition of illegal importation and smuggling of arms, ammunition, light weapons, chemical weapons, and pipeline vandalism, accusing it of impersonating security personnel in other similar agencies.

The Minister said NATFORCE is not known by Nigerian law and, therefore, should disband itself or face a forceful ban.