Prof. Osinbajo, who spoke at the launch of 100,000 Solar home system in Jangefe community, Kazuare Emirate in Jigawa State, said the government was determined to bring power to the  un-served communities across the country. 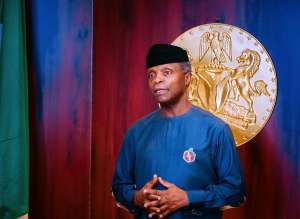 The Vice-President speaking further, applauded the management of the Niger Delta Power Holding Company Ltd., (NDPHC), for playing a leading role in the Federal Government’s plan to provide electricity to 25 million Nigerians through off-grid connections to 5 million homes.

He described NDPHC as a catalyst in the process of connecting communities across the country to off-grid systems.

Prof. Osinbajo said government was determined to bring power to un-served communities as part of the Nigerian Economic Sustainability Plan of the President Muhammdu Buhari’s administration.

He explained that the project which would be financed by a N140 billion fund would be paid for by the beneficiaries.

He further said that the N140 billion finance programme will support private developers to provide power to the households.

The V-P stressed that initiative is a partnership programme with the private driving the connections, supported by concessionaire lending by the Central Bank of Nigeria, (CBN) and commercial banks.