Nigeria’s First Lady, Dr. A’isha Muhammadu Buhari, yesterday, paid a memorable visit to the National Assembly to witness the submission of the Report of the Special Ad-hoc Committee on the Review of the 1999 Constitution. 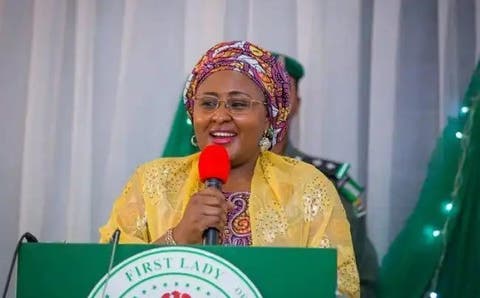 According to an issued statement by the Special Assistant to the President on Media & Publicity
(Office of the First Lady), Aliyu Abdullahi, the visit to both chambers of the Senate and the House of Representatives was in furtherance of her advocacy for affirmative action on behalf of Nigerian women.

Recall that the two Special Committees on the Review of the 1999 Constitution had recommended the entrenchment of 3 new provisions to provide for special seats for women in the National and State Houses of Assembly as well as the inclusion of women in political administration and reserve a quota for women into executive positions as an affirmative action.

“The First Lady attended the sessions conscious of the system-based challenges that women face in Nigeria and has drawn inspiration from the United Nations (UN)slogan of No one should be left behind, and that governance and leadership principles should reflect inclusivity as a global best practice. The quest for the integration of the National Gender Agenda of 35% women representation in the constitution cannot, therefore, be ignored by a forward-looking legislative institution like Nigeria’s.

“At all times, we need to be conscious of Nigeria’s regional and global leadership role, including being the seat of the ECOWAS, the ECOWAS Parliament, and the ECOWAS Court of Justice. As pace-setters, Nigeria can rest assured that many African and other countries will be inspired to emulate us as role models. The appalling level of under-representation, if not non-representation of women in Parliament is most unfortunately evident”, said Mrs. Buhari.

The First Lady was positive that the proper placement of women in the front row is not only on account of affirmative action, but in consideration of their merit, special skills, distinct endowment, and several other exceptional qualities that God has conferred on women in the service of humanity.

The First Lady commended the bold efforts of APC State governors in their determination to ensure the achievement of the ruling party’s campaign promises and bequeath an improved democratic culture.

She expressed confidence in the resolve of the State’s Houses of Assembly to deliver on the constitutional alteration exercise, especially in concurring with the National Assembly on the National gender agenda.

A’isha Buhari commended the 9th National Assembly for the on-going constitutional alteration process, which has promised to be one of the most profound deliverables for which posterity will judge them.

As President of the African First Ladies Peace Mission, the A’isha Buhari sought the understanding and partnership of the National Assembly to honour womanhood by gifting women of their request, and proving exemplary leadership for other countries to follow.

The First lady was supported during the visit by the Minister of Women Affairs, Dame Pauline Tallen; Finance Minister, Zainab Shamsuna Ahmed; Representative of UN Women to Nigeria and ECOWAS, Comfort Lamptey and other women leaders.