The Nigeria Labour Congress, (NLC), has insisted that workers and masses will not accept any further increase in the pump price of fuel in the name of subsidy removal, urging its workers and the citizens to prepare for total war against any fuel price hike. 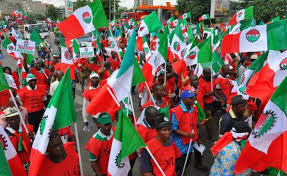 The NLC President, Ayuba Wabba, in his New Year message to workers, also named Zamfara, Taraba, Benue, Kogi, Cross-Rivers, Abia and Imo as seven States that are yet to implement the N30,000 minimum wage which took effect on April 18, 2019.

In the message, titled: ‘Year 2022 Felicitations: Keeping Our Hopes And Aspirations Alive In The New Year’, the NLC directed the affected States to commence indefinite strike to force the respective State governments to implement the new wage.

In the 9-page statement, the NLC, among others, said, “The Government is not relenting in its determination to push through further increases in the pump price of petrol and which, as usual, had been dubbed as ‘removal of petrol subsidy’. Organised Labour has made its position clear on this matter. We have told the government in very clear terms that Nigerians have suffered enough and will not endure more punishment by way of further petrol and electricity price increases.

“Our position in this regard is predicated on four major grounds”, it stated.  “First, is our concern on the deceit and duplicity associated with the politics of “petrol price increase” by successive Nigerian governments. Second, we are concerned about the missed opportunities and hemorrhage of potential revenue to public coffers and the government’s continued apathy to reconstructing the current negative narrative in our downstream petroleum sub-sector.

“Thirdly, as a pan-Nigerian organisation, we are concerned that the crisis in Nigeria’s downstream petroleum sector is further aggravated by the persisting tumult in the upstream subsector. Our fourth ground, our rejection of any further increase in the pump price of petrol is based on our agreement with Government in September 2020, that any further increase in the price of fuel should be shelved until Government and Labour undertake a review of the state of local refineries in Nigeria and until the government takes commensurate action to revamp our public petroleum refineries.

It, therefore, stated, “At our organ meetings that took place between December, 15 and 17, 2021, the Congress took a decision to protest the planned hike in the pump price of petrol by the government. The protest has been scheduled to take place in all the 36 States of the federation on January 27, 2022.

The NLC said the protest in the States would culminate in the submission of protest letters to the 36 State governors. Subsequently, on February 1, 2022, there would be a national protest to be held in the Federal Capital Territory.

“In line with the directives of the National Executive Council of the NLC, we have asked our State councils to commence industrial actions against the State government that are yet to implement the new national minimum wage and pension.  We urge Nigerian workers and people to dust their sneakers and fully participate in the peaceful protests and rallies aimed at salvaging our economic future”, it stated.

The Organised Labour also lamented the high insecurity across the country, high-cost food items, increasing poverty level and a crisis of governance in Nigeria, declaring that workers would not be passive ahead of 2023 general elections.