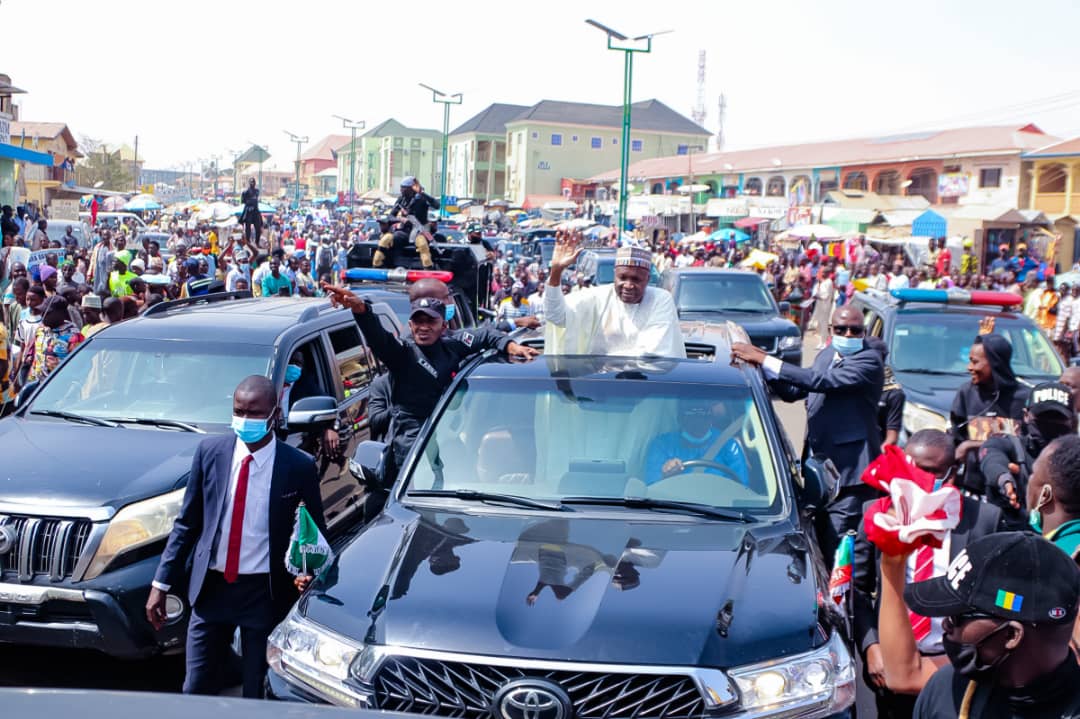 The Governor was received on arrival at the airport by top government functionaries, All Progressives Congress, (APC) stalwarts and thousands of jubilant supporters and well wishers, including politicians, youths and women groups,  students, various trade groups, artisans, commercial drivers, motorcycles/tricycles riders and other well meaning people of the State who accorded him and his entourage a rousing welcome.

From the airport to the inner-city and eventually to the Government House, people were all over the streets waving,  cheering and exchanging pleasantries with the Governor in demonstration of support and solidarity.

Addressing the mammoth crowd who converged on the government house premises to welcome him, Governor Inuwa appreciated them for abandoning their activities just to receive him, describing the gesture as heart-warming and encouraging. 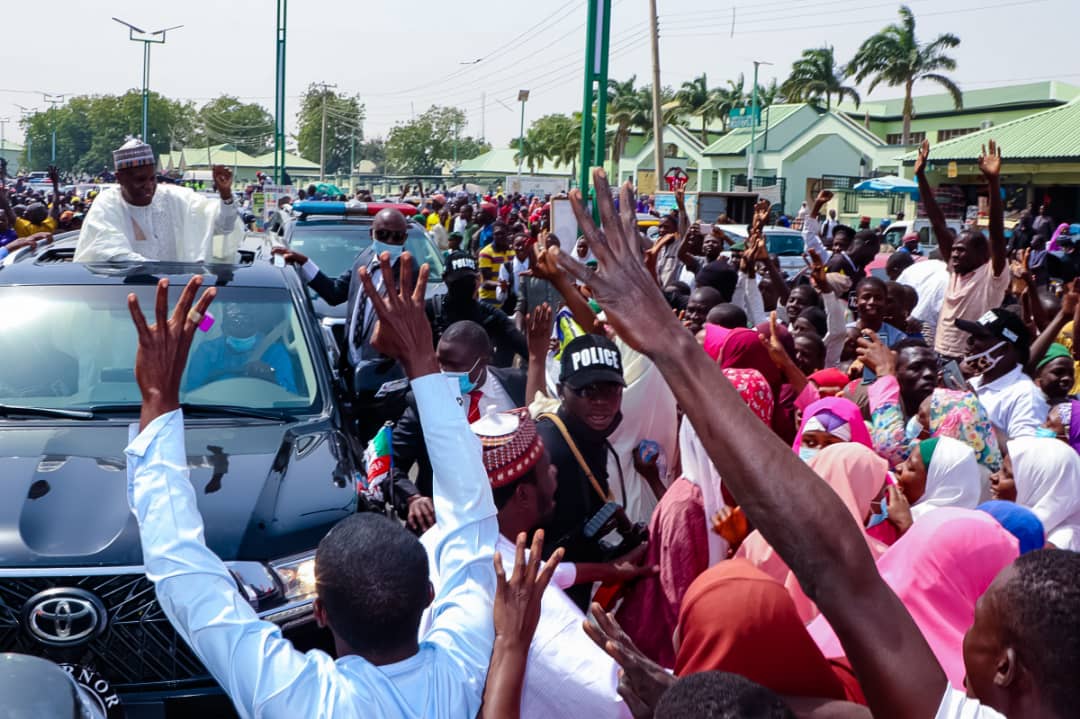 The Governor said the show of love accorded to him on arrival is endorsement and acknowledgement of his administration’s commitment towards bettering the lives of the people through social, economic and infrastructural development.

” I am highly encouraged by the kind of love and unflinching support I have been enjoying from the good people of the state, This show of solidarity will spur us to continue to provide dividends of democracy to the people of the state with equity and fairness.

The governor re-echoed his firm stance and belief in the ideals and principles of democracy and assured that he will continue serving the good people of the state and will not be distracted by the shenanigans of the opposition.

Governor Inuwa Yahaya said while his administration will continue to uphold the tenets of democratic values and practices, the State Government under his watch will not condone any act of impunity by any person or group of persons no matter how highly placed they may be.

“We will not be distracted by the activities of the opposition, we will keep pushing until we take Gombe State to the promised land in line with our campaign manifesto and the progressive mantra of our great party.  No shaking, insha Allah”,  Governor Inuwa stressed. 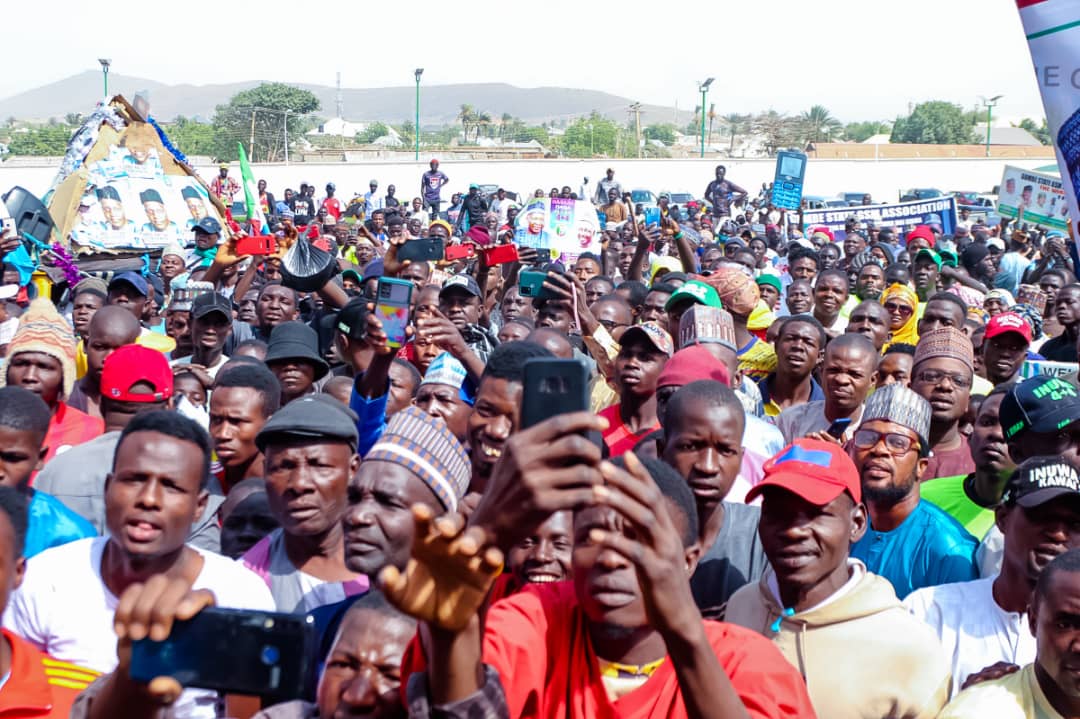 He assured the people of the State of his administration’s commitment to continue to deliver the dividend of democracy no matter how hard and tough the political journey may seem, just as he assured to continue to run an all inclusive Government.

“You will recall that since we came into office in May 2019 up on till the end of 2021, I left Gombe on the 3rd of January 2022. In these two and half years I never travelled and spent up to two weeks outside the State. This time around the journey was long but I want you to know that no single day, hour, minute or second that passed without me having the thought of the people of the State”.

“Even when I was abroad, I was busy engaging with development partners and investors to attract goodies that will better the life of our people. I am now back and developmental projects will continue in earnest. We will not relent until we get things done. We have the support and solidarity of our people and that is what keeps us going”, he added.

The Governor equally used the occasion to warn against political thuggery and violence.  Hear him, “Well I have always warned against violence and what I call political thuggery, especially with the issue of “Yan Kalare” that are found in Gombe and you can see the conduct of the youths has been very well today as far as I am concerned.  We shall continue that fight against violence and thuggery and in sha Allah we shall win”.

While answering questions from newmen after addressing the mammoth crowd, the Governor described his trip as a working one, where he engaged with some development partners and prospective investors with a view to wooing them to the Jewel state.  He said the Muhammadu Buhari Industrial Park which is under construction by his administration and other economic is a fertile ground for investors to explore.