The Attorney-General of the Federation, (AGF) and Minister of Justice, Abubakar Malami (SAN), has said President Muhammadu Buhari rescued Nigeria from collapse within the first year of his administration. 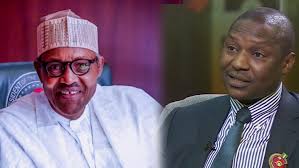 The Minister, who stated this in a radio programme in Kano, said all sectors of the economy suffered a serious setback before the coming of the president, adding that State governments were also rescued through various disbursement of bailouts.

According to the AGF, President Buhari came at a time when the economy was about to collapse, which would have led to a total collapse of the nation, but he rescued the situation within a short period of time.

He said, “President did this in less than one year; he rescued our economy from collapse. This is very rare, as not all leaders can do this. Even the developed countries suffered much before they rescued situations like this”. He further said that the president did not stop there but also introduced programmes such as N-power and Covid-19 interventions that provided employment opportunities to many Nigerians.

On insecurity, Malami said Buhari intervened in the North East and prevented Boko Haram terrorists from launching large-scale attacks, which were incessant during the past administration.

Malami added that the committed effort put together by the security operatives forced the bandits in the North-West region to initiate a reconciliatory move with the Federal Government.

He also gave reasons why President Buhari would not sign the new Electoral Act (amendment ) Bill, insisting that the law has not captured the interest of all Nigerians.

He said the new electoral law has an excessive cost implication, is discriminatory, as well as supportive of insecurity adding that signing it into law will only initiate a new crisis that will lead to court cases.

He pointed out that the President has to consider sustainable laws, saying, “The job of the President is that of politics, economy, business, security, legislation, politicians and non-politicians. This is because the leadership of the country is not for the politicians alone, it is a leadership that affects the social life of the people, their religion, economy, security and others. This is contrary to the leadership of the legislators which is solely political.

“Any Bill signed into law by President Muhammadu Buhari is in the interest of all Nigerians irrespective of their inclinations. He is after satisfying the interest of the over 200 million Nigerians he is serving and not a particular sector”, the Minister further stated.