Prominent Igbo elders have charged relevant authorities of government to deal decisively with members of the Indigenous People of Biafra (IPOB), saying the current level of  force being deployed might not be enough to curb their violent excesses. 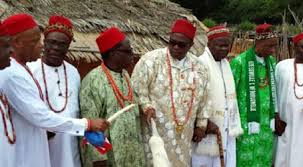 The elders,  under the aegis of ‘Conference of  Concerned Igbo Elders for Peace and National Unity’, reasoned that decisive  force was required at this time, considering recent events, which suggest that IPOB was determined to undermine security and peace in the South East, which is an integral part of the country.

The elders condemned the violent campaigns of members of the separatist group, while calling on Igbo sons and daughters at home and in the Diaspora, to dissociate themselves from the group, with a view to sending a strong message across that IPOB does not represent the views of Ndigbo.

In a press statement issued yesterday, the group threw its weight behind the call by Ohanaeze Ndigbo for a review of the recent appointment of Service Chiefs by President Muhammadu Buhari. They reminded the public that the IPOB remained a proscribed entity, having regard to an order of a Federal High Court in Abuja, which proscribed its activities, at the instance of a request by the Federal Government.

To cure this malaise, the group called on Igbo sons and daughters of voting age to take advantage of the on-going registration exercise by the ruling All Progressives Congress (APC), to register en-masse. In their estimation, integration into mainstream politics, through the instrumentality of the APC, will end the politics of exclusion and marginalisation against the South-East geo-political zone.

The group warned Igbo politicians against divisive tendencies, insisting that the time had come for Igbo politicians to articulate a common front which, in the final analysis, will engender confidence and trust.