Imo State governor, Senator Hope Uzodinma, is set to publicly name those behind the spate of insecurity in the State, today. 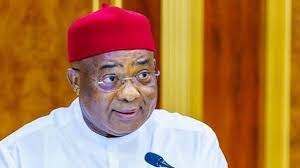 The State’s Commissioner for Information and Strategy, Hon. Declan Emelumba, disclosed this in a statement issued in Owerri, the State capital.

Emelumba said, “The governor will use the occasion of the 6th edition of the Imo Stakeholders Forum to name those who are sponsors and financiers of insecurity in the State”.

According to the Commissioner, “The Government is in possession of crack evidence of the involvement of those responsible for the carnage. Apart from the public being availed of the identity of these individuals, the governor will update Imo people on his performance in the last two years”.

Emelumba disclosed that “the stakeholders meeting/luncheon will now hold at the Government House, and not the Ahiajoku Convention Centre, Owerri, by 12 noon on Tuesday, January 4, 2022″.

He further noted that the meeting, which is the sixth in the series, is very crucial “because of the weighty issues that are up for discussion”.