The four bandits’ leaders were identified as Sale Turwa, Mani Turwa, Ado Sarki, and Sani Mai-Daji and were reportedly residing in the thick forest of Illela in Safana Local Government Area of Katsina State.

The State Commissioner of Police, CP Sanusi Buba, disclosed this in a press conference held at the Command’s headquarters in Katsina. 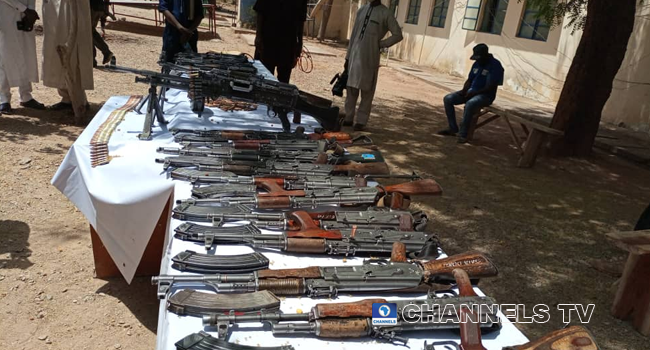 He explained that their surrender is part of the Katsina State Police Command’s effort in the ongoing onslaught against banditry, armed robbery, kidnapping, and other forms of crimes and criminality in the State.

Buba further explained that it’s also in line with Federal Government’s directive to all security agencies to clamp down on all marauding bandits in the forest, until either they are arrested, neutralized, or forced to surrender.

Katsina State is one of the regions worst hit by the activities of bandits across the country.

Recall that last December, bandits kidnapped over 300 pupils from a boy’s secondary boarding school in Kankara, about a two-hour drive from the state capital, Katsina; the boys were released within a week after successful negotiations with the kidnappers, the Katsina government said.

It is not yet clear whether the bandits who surrendered yesterday were granted amnesty.