The Sultan of Sokoto, His Eminence Sultan (Alh.) Sa’ad Abubakar III, has declared that the current spate of insecurity in Nigeria, particularly in the northern part, can only be stopped if the traditional institutions will stand up, expose the sponsors of such acts and support security agencies in fighting the war. 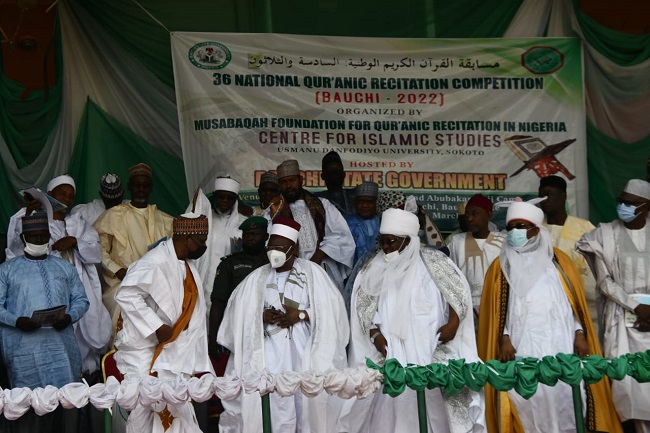 The Sultan, who is the President-General of the Supreme Council of Islam in Nigeria, (SCIN), made the declaration at the opening ceremony of the 36th National Qur’anic Recitation Competition, which was held in Bauchi.

Represented by the Shehu of Borno, Umar Garbai el-Kanemi, the Sultan lamented that the country is almost at a standstill due to the myriad of insecurity challenges, particularly kidnapping, killing and economic stagnation.

The traditional ruler said that “the right thing to do is for us to sit down, identify what the problem is and then proffer the best solution to the problem. We must seek the divine intervention of Allah (SWT), so that there will be peace in our States and the nation in general; otherwise, we will be doomed”.

According to him, “All the Emirs must challenge their District Heads, who will in turn challenge the Village heads, on the need to provide useful information about criminals and criminal activities in their domains, in order to help the security agencies in fighting the bandits”.

He also said that “prayers must be organised by the traditional rulers, in conjunction with the Malams, Imams (clerics) and other Islamic leaders in order to seek the face of Allah for divine intervention in the situation. Through that, we can overcome the challenges”.

While declaring the competition open, Bauchi State governor, Sen. Bala Mohammed, said that it is expected that the competition will bring out the best in the competitors on the knowledge and understanding of the Holy Qur’an and other issues about the Islamic religion.

The Governor, who was represented by his Deputy, Sen. Baba Tela, added that the recitation competition is intended to increase the knowledge of the Holy Quran and other Hadiths of Prophet Muhammad (SAW), urging the participants to focus on the competition by abiding by the rules.