The Chairman of the Northern Governors’ Forum, (NGF), Governor Simon Lalong, of Plateau State, says States in the northern region are happy with the declaration of bandits as terrorists and the deployment of the recently acquired Super Tucano fighter jets to completely defeat and end banditry. 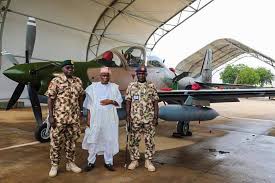 Governor Lalong was speaking to State House Correspondents yesterday, after he met behind closed doors with President Muhammadu Buhari.

Governor Lalong emphasized that the action needs to be taken before the next farming season, in order to guarantee the safety of farmers, leading to a bumper harvest at the end.

He also said the NGF has sent a Bill on redefining the role of traditional rulers in governance and would work hard to ensure the bill scales through all legislative processes.

Commenting on the current crisis looming in Nigeria’s governing party the APC, he assured members of the APC that the storm will soon be over. He stressed that the Party will hold its convention next month and that it will be successful.

On the impending litigation that might mar the holding of the proposed convention and chances of the party, Governor Lalong allayed such fears.