Concerned over the alarming increase in cases of insecurity, especially the frequency in which communities were been invaded and hundreds of innocent citizens, mostly women and children either being killed or kidnapped on a daily basis, the Committee For Defence Of Human Rights, (CDHR), has faulted the process of Service Chiefs’ appointment by President Muhammed Buhari. 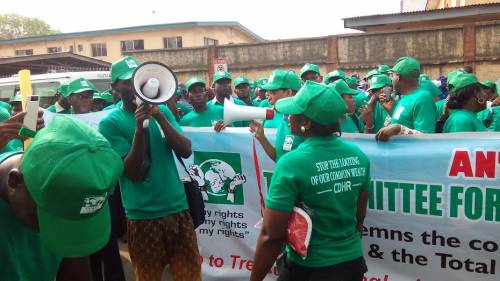 Appraising the security challenges in the country while speaking at a one-day in-house workshop on: ‘The Role Of Human Rights Activists In The Pursuant Of Good Governance’, which was held in Warri, National President (Dr) Kehinde Taiga noted that from every indication the recently appointed Service Chiefs have not added any value in tackling the situation.

While stating that the situation would have probably been different if President Muhammed had based the criteria for his appointment of Service Chiefs on professionalism, rather than using ethnic, religious and personal sentiments as yardsticks for the appointments he made last year.

According to him, ‘there is a common saying that you cannot give what you don’t have. And that’s exactly what we are getting now. The level of insecurity challenges in the country today is not any different from what it was then when all Nigerians demanded a change of Service Chiefs.

‘Perhaps it could have been a lot different if the President and Commander-In-Chief had based his appointments on the professionalism of the officers appointed across the board and not using criteria such as quota systems, ethnic and religious sentiments as well as personal relationships in making such critical appointments.

‘Look at where we are today. We are even worse off for it. The bandits are becoming more powerful and daring. They are getting stronger and building more confidence by the day. Our innocent people were being slaughtered on a daily basis, some being kidnapped for weeks and months in the forest and it’s as if the government does not know what to do again,’ Taiga lamented.

100% Natural Herbs to Finally End Premature Ejaculation, Weak Erection and Small Manhood. >>>Click Here for Details<<< .
Continuing, he said: ‘Part of the reason we voted out PDP was to give the opportunity to APC to the insecurity challenges in the country then but look at us today, we can’t even sleep with our two eyes closed again. We are no longer safe at home, on the road, on the rail and even in market places where we do our businesses.

Premature Ejaculation & “Small Joystick” Resolved in 7Days… Click Here For Details .
‘Our children are no longer safe in their schools, our farmers are now endangered species on their farmland causing food scarcity and hunger across the country. Worse of all, we are no longer safe in our places of worship, churches and mosques, mostly in the Northern region.’

‘Even our children who are on national assignment as Corpers and others on essential duties like doctors and nurses were being targeted and killed on a daily basis”. So where lies the promises on providing security made to us by Buhari led APC Administration in 2015 and 2019?,’ he queried.

Speaking on the forthcoming general elections, the CDHR president urged Nigerians not to ever make the mistake of voting along the line of political parties but to vote for credible individuals who can deliver the country from total collapse.

“Since we have tried the two major political parties and they have failed us, our attention should be shifted to individuals with the capacity to salvage the nation in the next election”, he concluded.