The new Chairman of the ruling All Progressives Congress, (APC), and a former governor of Nasarawa State, Senator Abdullahi Adamu, has told Kaduna State governor, Nasir el-Rufa’i, and the Transportation Minister, Rotimi Amaechi, that he does not know how they were thinking about the security situation in Nigeria, saying it was wrong for one to take a knife and rip open his stomach. 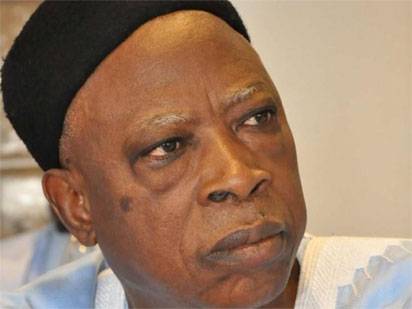 Adamu, who spoke in an interview with the Hausa Service of the British Broadcasting Corporation, (BBC), asked why he never took offence if people called him a wizard, adding that he was not eating humans and as such name-calling only amused him but that he never felt angry.

The National Chairman of the APC, however, said they would work assiduously and round the clock to ensure victory for the ruling party in the forthcoming 2023 elections.

On how they will pacify those who were aggrieved by the outcome of the recently concluded convention of the APC, the APC Chairman said ” first and foremost it should be known that Allah gives leadership and not man”.

Regarding the assertion that going along with him would not be smooth because people considered him to be rigid and hard to align with, the new APC chairman explained that “no one should be worried simply because someone told him I’m difficult to relate with”.

He said that although Nigerians elected a President and their party the APC, during the crisis the PDP and all Nigerians may be affected, adding that someone will see and look the other way, or criticise the President, saying every person may not be immune from such happening.

He said those who, rather than coming out to assist the Government on security matters, developed cold feet and should therefore change their decision.

Adamu further said his mission was to lead APC to success and called on all to put hands on deck for the peace and stability of the nation.

On the remarks credited to a strong figure in the APC as well as Governor el-Rufa’i, that the ruling party had failed in providing security, and subsequent remarks by Rotimi Amaechi, Adamu said he won’t be allowed to join issues with the party stalwarts but cautioned that ”one should not use a knife to rip open his stomach“.