The Editor-in-Chief/Chief Operating Officer of Premium Times, Musikilu Mojeed, has emerged as the President of the Nigeria chapter of the International Press Institute, (IPI). 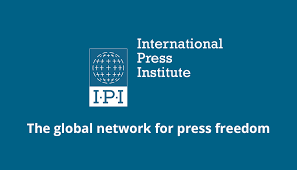 A statement issued on Friday by the body, noted that Mojeed emerged as president unopposed during a session of the General Assembly of the Institute, which was held physically and virtually in Abuja, on Thursday.

At the meeting, the General Manager, Business and Strategy of Media Trust Limited, publishers of Daily Trust, Ahmed I. Shekarau, was also elected Secretary of IPI Nigeria.

Shekarau won the majority of the votes cast at the election, defeating the only contender, Qasim Akinreti, who is the Deputy Director, Digital Media, at the Voice of Nigeria, (VON).

The statement issued by the Executive Board member of the global body of the Institute, Raheem Adedoyin, also announced the emergence, (unopposed), of Rafatu Salami, Assistant Director, Digital Media of VON, as Treasurer.

The statement disclosed that the General Assembly “mandated the newly constituted exco to work towards filling the vacant positions of Deputy President, Assistant General Secretary, Financial Secretary and Legal Adviser, which were not filled yesterday because there were no nominations into them”.

The election was conducted by a 3-member Electoral Panel, which had the Chairman of Daily Trust, Kabiru Yusuf; the founder of Radio Now, Kadaria Ahmed and Mr. Adedoyin as members.

The oath of office for the newly constituted Ex-Co members was administered immediately after the general assembly by a lawyer/Notary Public, Zainab Musa.

The swearing-in of the executives was witnessed by the global IPI Executive Board member, Adedoyin, and members of the Nigerian chapter of the Institute, among whom include a Director in Media Trust Limited, Mannir Dan-Ali; Chairman of the Editorial Board of Blueprint, Zainab Suleiman Okino; Deputy Editor, 21st Century Chronicle, Catherine Agbo,

In his acceptance speech after his emergence as president, Mojeed, an award-winning journalist, who has steered the affairs of the globally respected Premium Times brand, expressed the appreciation of his team to all members of IPI Nigeria for the confidence reposed in them.

He assured that the new Exco would work harder towards deepening press freedom and accelerating free speech in Nigeria and the world.

Messrs Mojeed and Shekarau took over yesterday from Messrs Yusuf and Adedoyin, who had piloted the affairs of the body for years as Chairman and Secretary, respectively, and have since been elevated to the Board of Trustees of the organisation.

Other members of the Board of Trustees of IPI Nigeria are Ms. Kadiria Ahmed, of Redio Now legos; the Managing Director of ThisDay newspapers, Eniola Bello, as well as veteran journalist and publisher of Newspot Online, Folu Olamiti.

The International Press Institute (IPI) is a global network of media executives, editors and leading journalists.

Since its establishment in 1950, it has consistently and strongly crusaded for media freedom in every corner of the world.

He has won several awards including the FAIR’s Editor’s Courage Award, and the Wole Soyinka Investigative Reporting Award.