A former deputy leader of the proscribed Indigenous People of Biafra, (IPOB), Uche Okafor Mefor, has described the IPOB as the greatest killers of Igbos. 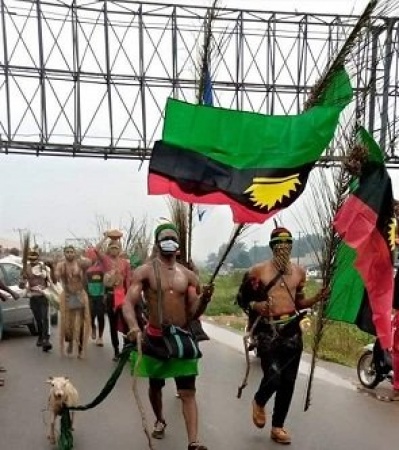 Mefor made the remark while accusing IPOB of “gruesomely killing its own people”.

He maintained that the group was guilty of crimes against humanity, adding that IPOB was “lawlessness”.

The post, stated: “You cannot be claiming that the Nigerian State is killing our people but turn around to behead the same people you vowed publicly to protect and deceptively shift responsibilities when the chips are down and the consequences arise.

“These are the killers of their own people, especially Igbo Biafrans. These killers are indeed daring, desperately presenting themselves as victims and saints but further demonise and victimise the already victimised victims of theirs.

“You are not in democracy, you are in freedom fighting, you embark on lawlessness and apply ‘jungle justice’, extra-judicial killings on your victims; you hate human rights, denied your victims such but want due process in your cases? You dangerous hypocrites! What you are doing of late is criminality and not freedom fighting. Demonic liars”.

Recall that IPOB has been linked to several assaults and killings across the southeast, in their enforcement of sit at home

IPOB has continuously threatened the South-East peace, annihilate anyone that stood in its way, and propel their dark violence consistently through propaganda, with the use of Radio Biafra.

The banned group has turned the hitherto relatively peaceful region into a war zone, by consistent killings and murders, which they consistently denied.