The Inspector-General of Police (IGP) Usman Baba, has expressed concern over the ability of the Islamic State of West Africa Province, (ISWAP), to fire rockets in communities in Borno State. 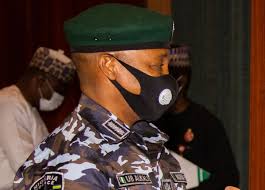 Recall that ISWAP had launched multiple rocket attacks in Maiduguri, the state capital, hours before the visit of President Muhammadu Buhari to the State. Many houses were destroyed by the explosives that landed in different areas including Ngomari, Bulumkutu, Ajilari, and Ayafe communities.

The IGP, while fielding questions yesterday, at the end of the emergency Security Council meeting, presided over by Buhari at the Presidential Villa, said the ability of the terrorists to strike with rockets is worrisome.

He, however, said the insurgents were unable to achieve their objectives.

“Yes, they have done it, but to a large extent they have not achieved what they intended to achieve because of the situation the security agencies, particularly the military, put in place”, he explained.

When asked if the security agencies have been able to determine the origins of the rockets, the IGP said, “Yes, it had been done before and even after. Some of those who must have planned and thrown those rockets have been taken out.”

The Police boss assured that the security agencies are trying to improve on what they are already doing “to ensure there is peace, law and order during the yuletide period and beyond”.

He restated Buhari’s marching orders to security agencies, which he said are always the same.