Bandits, on Thursday night, attacked residents of Kanuwar-Isa and Kugu, of Dutse ward, situated in Zaria local government area of Kaduna State, killing one and kidnapping 13 others. 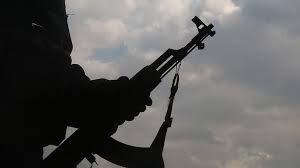 According to a source who lives in the community, Mohammed Danmusa told newsmen, yesterday, that the gunmen stormed the community around 2.00 pm and shot sporadically.

He said as the shooting persisted, villagers panicked and began to run in different directions for safety, adding that one native was shot dead while running for safety.

”We were all asleep when the gunmen invaded the community. They started shooting immediately as they arrived. The villagers were awakened by the sporadic shooting and started running in different directions”, he stated.