The chairman, National Council of Traditional Rulers of Nigeria (NCTRN), and Sultan of Sokoto, His Eminence, Muhammadu Sa’ad Abubakar III, has cited military decrees that undermined the role of the traditional institution in nation-building and development and subsequently laid the foundation for national insecurity. 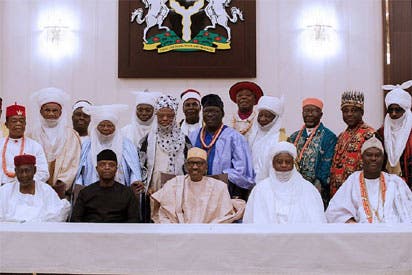 The Sultan stated this on Thursday, while presenting a memorandum for ‘the re-instatement of the status of the traditional institution in the Nigeria Constitution and establishing relevant bodies to give effect to national roles’.

He was represented by the Etsu Nupe, Dr. Yahaya Abubakar.

The chairman of the traditional Council traced the present state of insecurity to certain decrees passed during the military era.

The Sultan in the memorandum submitted to the Senate Committee on the Review of 1999 Constitution said, “General Ironsi’s 1966 Unitary Government Decree, General Gowon’s and General Obasanjo’s 1967 and 1976 Local government Reforms Decrees respectively, stripped the traditional rulers of their powers and gave same to Local Government Councils, thereby giving birth to the insecurity and corruption.

He said these laws crippled traditional institution from playing their critical role in national development.

According to him, Nigeria, before the amalgamation of 1914 was a conglomeration of various Kingdoms, Caliphates, Chiefdoms and Empires with various traditional authorities as bases for governance.

He further said that between the 1920s and 1960s, traditional rulers were influential and in charge of Native Authority administration.

He pointed out that Nigeria’s First Republic Regional Government had a bi-camera legislative arrangement with the House of Assemblies.

During this era, the Sultan said, “the society was progressive, peaceful, decent and full of beautiful traditions and cultures. Lives and Property were sacrosanct and accountability and honesty were the hallmarks of the traditional local administration”.

On his part, the Senate President, Ahmed Lawan, said Nigeria has missed the relevance of the traditional institution on issues of security especially now that the nation is in a very tight security situation.

He said the Council of Traditional rulers played a crucial role in the building of the society in the time past and can still be relevant in bettering the society.