The Governor of the Central Bank of Nigeria (CBN), Godwin Emefiele, yesterday said that no fewer than 25,000 people would be working at the National Arts Theatre, in Lagos, upon completion.

The apex bank’s governor, made the disclosure yesterday, at the contract award signing ceremony for the restoration and refurbishment of the Theatre, in Iganmu, Lagos. 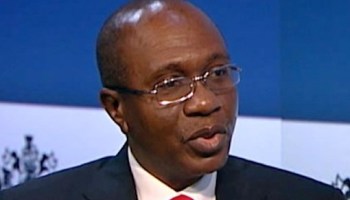 According to Emefiele, the first phase of the project, which he said would have four hubs for music, fashion, information technology and movies, would be ready in 15 months. The CBN governor further disclosed that the first phase would gulp about N21.3 billion.

Describing the complex as one of the most “iconic buildings” in Nigeria, Emefiele said despite its current state, nearly 45 years after it was built, it had continued to inspire the creativity of Nigerians, especially the teeming youthful population.

He added that the CBN’s Bankers’ Committee would provide funding for a prototype cluster located to the north of the National Arts Theatre, a development the committee, labelled the “Signature Cluster”.

He said that the Committee had gone through rigorous and transparent processes to arrive at these names, saying they are well-regarded names in the industry.

Besides, he said there were timelines and milestones which would be followed for successful completion and hand over.