The Coalition of Northern Groups, (CNG) has warned that Nigeria under President Muhammadu Buhari can by all standards of judgment be categorised a failed State. 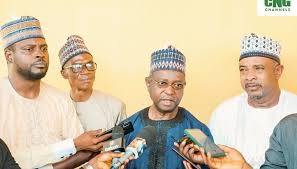 Similarly, a former Speaker of the House of Representatives, Ghali Umar Na’Abba, expressed concern over the deepening distrust in the country, saying the current leadership has created mistrust among Nigerians.

Na’Abba, who spoke at the Maitama Sule Leadership Lecture Series at the Nasarawa State University, with the theme: “Constitution, Constitutionalism and the future of Nigeria”, organised by the Students wing of the CNG, stressed the need for the Federal Government to secure the nation’s forests amidst increase in kidnappings and banditry attacks. “More has to be done by the federal government to secure our forests”, he stated.

Na’Abba also stressed the need for the federal government to do more in terms of developing and expanding the nation’s economy.

On review of the nation’s Constitution, he said Nigeria needs a new Constitution as against the amendment of the 1999 Constitution, in order to accommodate emerging issues of good governance for the greater interest of all Nigerians. The former lawmaker also said Nigeria’s politics must “be deregulated; because the nation cannot expand its economy without deregulating politics and this deregulation comes in the form of the control that political parties have been subjected to under the governor in the States.

Also speaking at the event, Spokesperson of the CNG, Abdul-Azeez Suleiman, lamented that by all standards of judgement, Nigeria can today be categorised as a failed state under the current administration, having disintegrated to a point where basic conditions and responsibilities of a sovereign government no longer function properly.

“Already, widespread corruption and criminality, the intervention of State and non-State actors, the appearance of refugees and the involuntary movement of populations, have become the order of the day, compounded by a sharp economic decline”, Suleiman further said.