The President of the Ijaw National Congress (INC), Professor Benjamin Okaba, has berated former President Olusegun Obasanjo for using the 1999 Constitution of Nigeria to justify his claims that crude oil and gas in the Niger-Delta belonged to the country and not the people of the region. 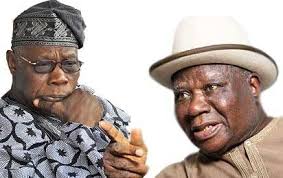 Okaba, who stated this during a television programme yesterday, described Obasanjo’s position as a second thought as it contradicts his earlier argument that mineral resources in the Niger-Delta were given by God for all Nigerians.

He argued that the former President could not be relying on a Constitution that had been variously rejected and described as a fraud and a military document imposed on Nigerians.

Okaba further said the unitary characteristics of the 1999 constitution which Obasanjo celebrates, had become the major reason Nigeria was collapsing on all sides as the constitution remained a faulty foundation of the country. He stated that Section-140 of the 1963 Constitution, which Obasanjo made reference to in his open letter of reply to that of Ijaw nation leader and elder statesman, Edwin Clark, gave 50% of proceeds from mineral resources to regions in recognition of their ownership of the resources.

The INC chief further contended that the former president was “representing a class of people who had fought so hard to sustain a system that is colonial, military-driven and serves hegemonic interest against the interest of other people in Nigeria”.